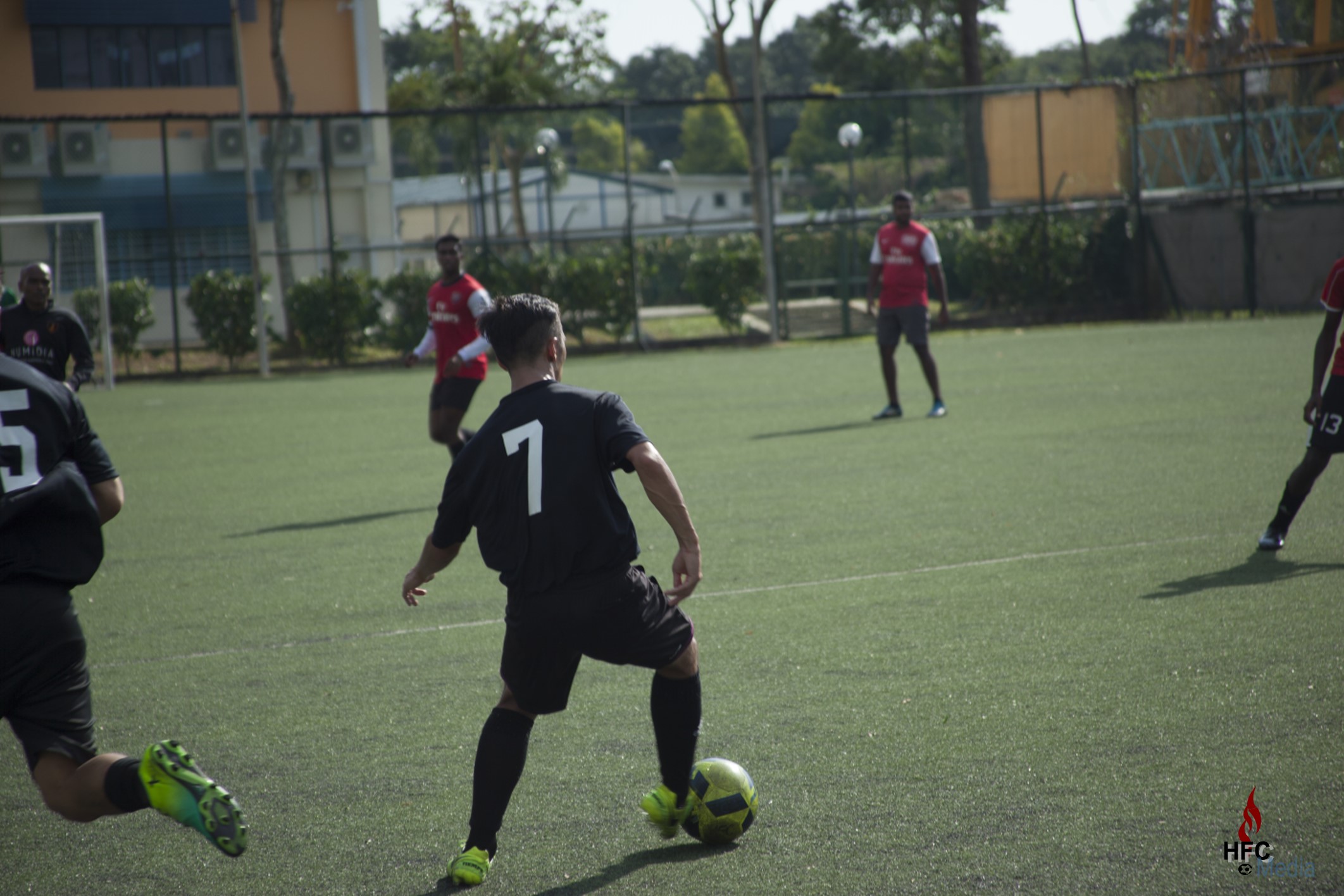 It could not have been more perfectly setup for Hilderinc FC in their return to ESPZEN Champions’ Cup action as they advanced to the next round through a 3-2 penalty shootout win after a highly tactical and disciplined performance against Fighting Cocks FC.

Returning to the premium cup competition for the first time since 2016, the Blacks were in full know of what to expect from the ESPZEN Saturday Division 1 side, and played their cards with near perfection and were unfortunate not to see off the challenge in regulation time instead of being taken to the thrills of the spotkick drama, which in the end produced the right outcome.

Despite the robust early intentions of the Vietnamese to ruffle the Hilderincs to retreat into their own half with their direct approach, the Blacks failed to take the bait, but instead played the ideal counter-pressing football, engaging their opponents with lightning quick raids and constant harassments high up in the attacking third.

Complementing a stoic backline, who were at their parsimonious best, the midfield got stuck into their task of dominating the middle of park and were the furculum for the Hilderincs’ numerous incursion, and with the Cocks fluttering for any manner of rhythm the Blacks took advantage and were unfortunate not to go into the break with comfortable lead with attempts from Varanthan Arumugan and Nico Olvera, though FCFC were miles away in the freekick count with HFC feeling the effects of the combat.

With players ready to seamlessly carry on with the job, the Hilderincs’ depth in quality was on full showcase as although they had to replace Dionisis Kolokotsas at half time and Basil Al Barr earlier in the first period due to injury, Nicholas Ledenmark and Shiv Tulsiani respectively were magnificent in their instead, showing zero drop in endeavour nor poise.

The advent of the second half was a carryon of the first with the Blacks not letting up on their objectives and the opponents being charitable with their fouls, which though stifled the rhythm, allowed the Hilderincs to keep advantage in attacking positions.

Prodding relentlessly from both flanks, it took the guile-st of touches from Jon Loh to split the Cocks’ defence to allow Diogo Baptista to slip the ball into the back of the net, sending the Blacks into raptures.

Not one to sit on a one goal lead, especially against an experienced side, the Hilderincs were repeating asking the questions off their opponents.

However, just as the Blacks were contemplating a tactical option to secure their lead with minutes ticking away, they were pegged back with an opportunistic leveller, much against the run of play after the ball pinball-ed inside the box following a corner.

The Hilderincs response was instantaneous and after trying to pry the Cocks, they were awarded a penalty after the referee penalised the latter for a handball.

But despite fullmarks for the courage to step up to take the kick, the FCFC keeper pulled off a decent save to deny a late winner.

Still, the action from the Blacks was over and with minutes left on the clock, Nico Olvera fooled everyone by pick pocketing the ball to run through on goal, but with only the keeper to beat, he smashed his shot against the custodian and the follow up going a begging for a dramatic finish with the referee blowing for penalties.

With three spotkick each, there was little margin for error and apart from the designated takers in Diogo Baptista, Varanthan Arumugan and Nico Olvera primed, Gowtham Durai, who made a fantastic save earlier in the second half, was cruelly beaten with the first kick after he got his hand to the ball, only to see it creep into the net afterwards.

However, with both Diogo and Varanthan dispatching their kicks with perfection, the Hilderincs’ keeper did his part and saved the Cocks’ third and final kick, leaving Nico Olvera to do the deeds and the Spaniard duly obliged with calmness to send the Blacks through to the next round.

While clearly delighted to the progression, Hilderinc FC’s main focus remains firmly on the ESPZEN Saturday Division 2, and with the second installment with pace settlers Club M FC coming up next week, the Blacks will draw massive strength from today’s display as they kick start their league duties.