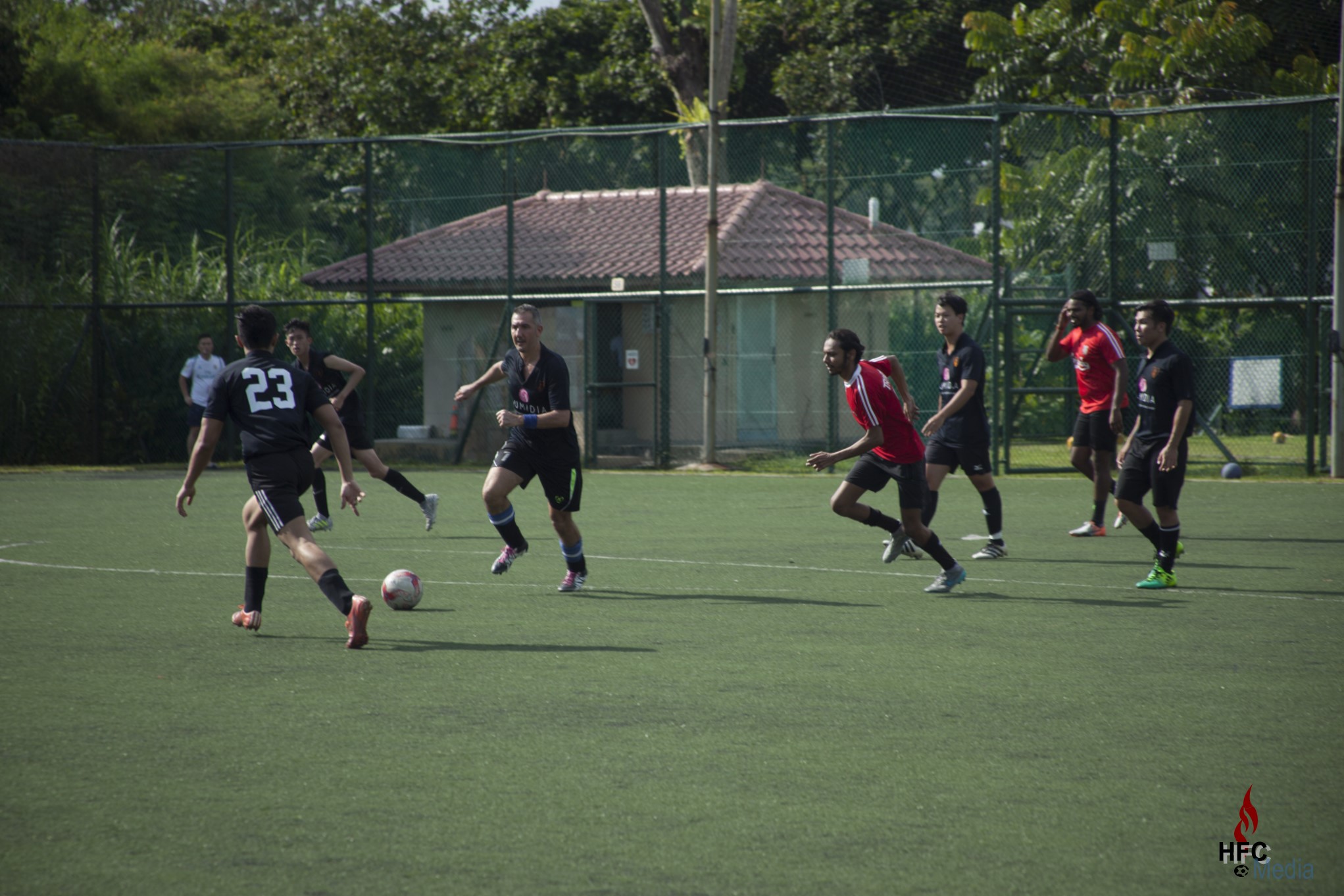 After a full month of their local version of a football “winter break”, Hilderinc Football Club returned to the affairs on the pitch with a bruising friendly against fellow ESPZEN Saturday League side, FC Hospitality, who did well to deceive reality, contradicting their genial epithet.

If the Blacks had plans to ease their way to match fitness after the lengthy inactivity, they were, however, forced to quickly jettison it entirely as the Division 4 side sort to bellicosely impose themselves against their counterparts from Division 3.

With several regulars still unavailable, the Hilderincs took the opportunity to experiment with both formation and personnel, which included no less than five players who had either played only one game prior or were making their bow in the colours.

While the tone of the proceedings were set by the opponents’ robust, sometimes overly administered tackles, the Blacks found focus with their usual pass and move football, though the rustiness was telling, as they took time to get up to speed, as the impression that it was only a friendly quickly vanished under the heavy challenges and unwarranted confrontations, normally seen in full-blooded league fixtures.

Despite the higher ration count for productive play, a lapse in concentration allowed the Hospitalit-ers to steal the lead against the run of play when an unattended player smashed in a routine freekick, punishing the Blacks for their inattentiveness.

The Hilderincs were swift in response, but their endeavours were halted each time by a forceful, and at times, reckless tackles, resulting in a slew of freekicks for the Blacks.

Though limited to long range attempts, Erdogan Albay came closest to drawing level when his stinging shot was somehow palmed away by the FCH goalkeeper to keep the Blacks trailing into the break.

The restart brought renewed vigour from the Hilderincs who were encamped in the FCH’s half for vast periods, probing and prodding for parity of score.

The best chance of an equaliser came when Logaraj Sundram in full flight found Ian Morris in a perfect position to score just yards from goal, but the skipper dreadfully scuffed the delightful cut-back to leave him unable to even claim rustiness as a feeble excuse to conceal the embarrassment nor the tongue-lashing that he received from the former who felt hard-done for all his fine work in setting the latter for what was a guilt-edged opportunity.

Nonetheless, the Blacks were immediately back in their pursuit and they were finally rewarded for their persistence when Erdogan Albay’s cornerkick was met by a brave driving header by Riley Aiman, who incidentally wrote himself into the record books by becoming the second 17 year old debutant to score in successive games after his mate, Nabil Zahrif scored on his own bow against Pacifire FC exactly four weeks ago.

While going for the winning goal was now the Hilderincs’ objective, the fact that the opponents were still in the hunt for more thoughtless tackles, the Blacks were more than happy to see this one out with their limps intact, apart from the many bruises, trophies of a worthless and insignificant contest, though they can be proud of their exertions after a long break.