Hilderincs Show Character In Come From Behind Win 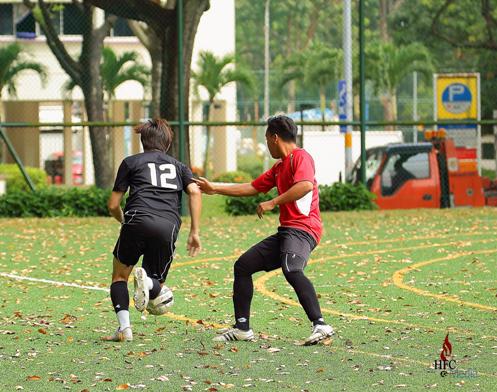 Like previous games, the Blacks’ habit of not stamping their mark on the game and taking control proved to be worrying and within the first ten minutes, and HTFC found themselves two goals down though very similar circumstances.

The very reliable backline of the Blacks could not deal with long punts up the field and the Ville’s striker was put through on both occasions, slotting past the stranded JC to give Boundary Ville FC a 2 goals cushion.

But on a brighter note, those were the only two times Boundary Ville tested the Blacks’ defence for the remaining of the match.

However, the Blacks pulled a goal back with Rahmat Saring halved the deficit from the spot after a melee in the box resulted in Basil Al Barr’s shot willfully handled by a Boundary Ville player.

Pumped up HTFC pressed high and soon gain control of the match through the abundance of midfielders available.

The second half started with exactly like how the first half ended, with the Blacks pressing high and not allowing their opponents to play their game, hence restricting them to long balls, which were dealt with comfortably.

HTFC soon went ahead in the game, when a Rahmat Saring’s corner was met by the head of Mathew Joseph, with the latter scoring what would be the winning goal.

The rest of the match continued without much fanfare, with neither team able to find the breakthrough.

However, it was an important win for the Blacks who showed good character coming from a goal down.