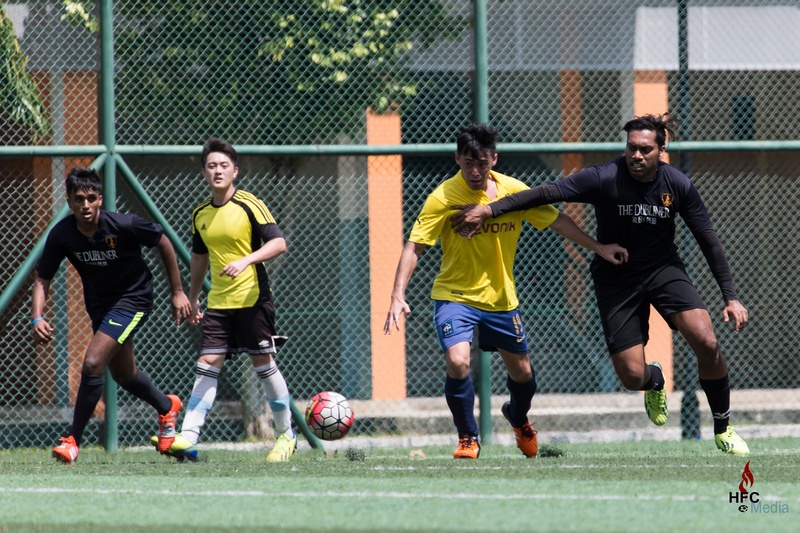 In building up to the Hilderinc FC’s ESPZEN Saturday League debut in November, the Blacks continued with another constructive display against Naranja AFC when they were held to a 3-3 draw.

Geared as a transitional first phase in a structured pre-season programme, the Blacks were focused on settling in regulars to Saturday football, as well as presenting fresh faces to the squad, enhancing the depth of the squad, though performance on the pitch was still an essential goal not forgotten.

While the Blacks were sprightly off the kick-off, they found themselves a goal down within five minutes when they failed to judge an innocuous cornerkick, allowing it to sneak into the net.

As usual, the Hilderincs’ response was swift, wasting little time in their efforts of finding an equaliser, with Sam Thorley, Sashikumar Mahathevan and Rahmat Saring, coming close, only to be denied by a quick thinking goalkeeper.

However, there was no denying Sashikumar, who got his name on the scoresheet with a perfectly executed scissor-kick off a corner, bringing the Blacks on level terms.

If the big forward’s opener was spectacular, his brace was an unassuming tap-in from another corner after Sam Thorley’s presence put the keeper off for the former to profit from.

Cranking the pressure on the Oranges, the Hilderincs were a constant menace with their fluid intent, and were unfortunate to take only a slender lead into the break, though they could have counted themselves equally lucky to see a Naranga effort bounce off the foot of the post after a mix-up.

The second half was a more measured approach by HFC, who were concerned about substance than the effect, as more exertion was spent on keeping and passing the ball at will, as supposed to finding all opportunities to increase the goal tally, though in fairness, they could and should have put away a few of the chances they created to give a more comfortable final outcome.

There was also affirmative reply to being dragged level when Naranja made it 2-2 as it took mere seconds for the Blacks to hit back immediately, regaining their lead after Rahmat Saring finished off crisply after Sam Thorley played him through with a delightful pass.

While the Hilderincs could have sealed the win had the simplest chance in the game was put away, they paid the price for clumsiness at the other end, allowing Naranja to yet again equaliser with their third soft goal of the game.

Even though it was far from a classic Hilderinc display, the objective of the day was not lost despite the result, with encouraging markers laid.

And with several Hilderincs due to return in the coming weeks, and with more quality additions likely to be added to the squad, preparation for the season opener is on track.