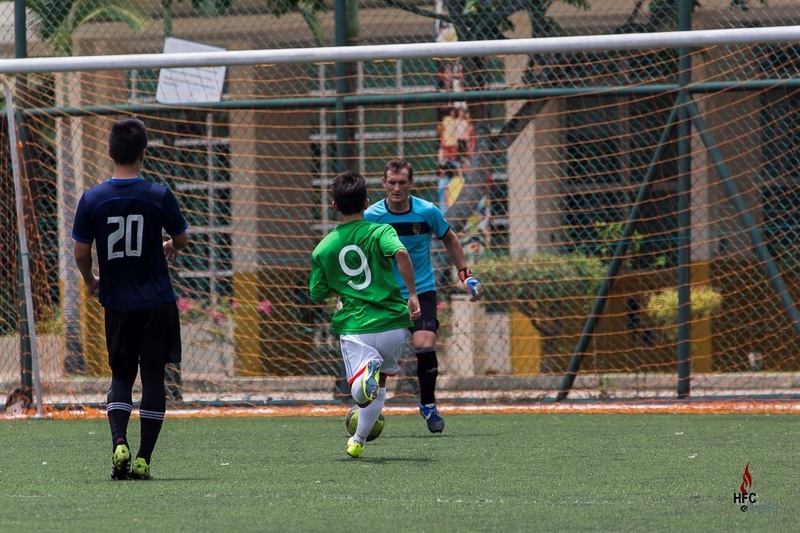 Hilderinc FC continued their groundwork for form with another productive friendly game, away from a patchy ESPZEN Sunday League fixture list, which has seen them play only four league games since the start of the Season 24 in March 2016.

Putting the disruption aside, the Blacks fashioned an effective display against a raw Black Knight FC side at the Bukit Timah Sports Pitch.

While a step-up in quality in terms of the oppositions from their recent friendlies, the Hilderincs put on an engaging show, demonstrating their potential to play eye-catching and prolific football, especially with the standard enhanced by the fresh additions to the squad.

Welcoming back Nicholas Ledenmark at long last, having missed the classy defender for almost three months, it was Parthiban Aruchamy, who was playing in goal despite the Blacks’ horde of goalkeepers in their books, stole a little of the thunder with his impressive display between the sticks, complimenting a measured collective effort all around.

If there were any pre-match plans to counter the dimensions of the pitch, they were quickly allayed as the Hilderincs flourished, taking to it with considerable easy as they stretched the opponents at will with their passing and movement.

Within couple of minutes, the Blacks were already positioned in the Knights half, prodding their nervy defences, threatening to open them up at will.

The first chances of the game felt to Fernando Carrgeal and Mathew Joseph, but their lenient efforts let the Knights off lightly without being duly punished.

However, there were no niceties from Sam Thorley, who shrewdly dispatched his freekick to put the Blacks ahead with this first goal for HFC.

The opener proved the inspiration for the Hilderincs to pursue the Knights relentlessly thereafter.

In a twenty minute spell, the Blacks would have no less than twelve attempts on goal, with Rahmat Saring, Ian Morris, Fernando Carrgeal, Satoki Yoshida and Peter Wang heavily involved in the proceedings, but were either denied by the goalkeeper, last ditch defending, or just lack of composure on their part to extend their lead.

Nonetheless, it was the manner in which the Hilderincs went about creating these chances that were a delight, as with crispy passing from defence to attack, the entire team were involved in each attempt, leaving the Knights chasing shadows.

When the Black Knights did finally string some attack, the HFC backline of Nicholas Ledenmark, Sam Thorley, Benoit, Alex Wong, and later Darren Ang, proved unbeatable on the day.

And on occasions when they were breeched, Parthiban Aruchamy’s heroics were monumentally signification.

Defying the odds on a defender playing in goal, the stand-in goalie was instrumental in keeping the scoreline in the Blacks’ favour, as his reading and positioning was highly commendable, while his one on one saves were exceptional.

With the rear-guard and midfield peerless, the Hilderinc clockwork finally doubled their lead when a fine move that was seized by Peter Wang, initiated by Alex Wong, intermediated by Fernando Carrgeal, before being set-up by Rahmat Saring for Satoki Yoshida to finish off swiftly in off the post, taking a well-deserved and well-accomplished lead into the break.

The Blacks re-emerged from the recess with an altered formation as Leslie Eng, another returning Hilderinc, took his spot as an advance midfielder as supposed to his usual defensive role, in an objectively experimental move which produced remarkable results, as the Club’s second longest serving player gave an exciting debut in his new role, even coming close to scoring with a quick reaction attempt.

The second half was an unhurried affair for the Blacks as they consolidated their position, keeping possession of the ball for lengthy periods, though the Black Knights troubled their defences a little more, they were appropriately dealt with.

Keeping to the their attacking initiative, the Hilderincs came close on several occasions, with corners providing most of the threats, as Bayu Tanmizi had his header bounce off the keeper and over the crossbar, Rahmat Saring had his shot meet the fingertips of the same, while Sam Thorley’s long ranger drifted inches over the woodwork.

However, it was another corner from Alex Wong and a flamboyant finish by Rahmat that would add the third for the Blacks, giving them a comfortable lead going into the final quarter of the game.

Black Knight FC did pull a goal back again the run of play but the Hilderincs’ response was immediate as they scored within a minute of it.

A sweet through ball by Nicholas Ledenmark to Rahmat Saring left the enthusiastic forward to apply a sassy finish to score his brace for the day and third Hilderinc goal in two games.

With time running down and pace going into recreational mode, the Knights scored their second but by that time if was nothing more than a consolation for a side than was well and truly beaten.

Returning to league action a week on Sunday, and against Division 4’s top side, FC Alyza, the Hilderincs will be under no illusion that they will have to produce when it matters most and from the indication of the past two weeks, much encouragement and hope can be taken.