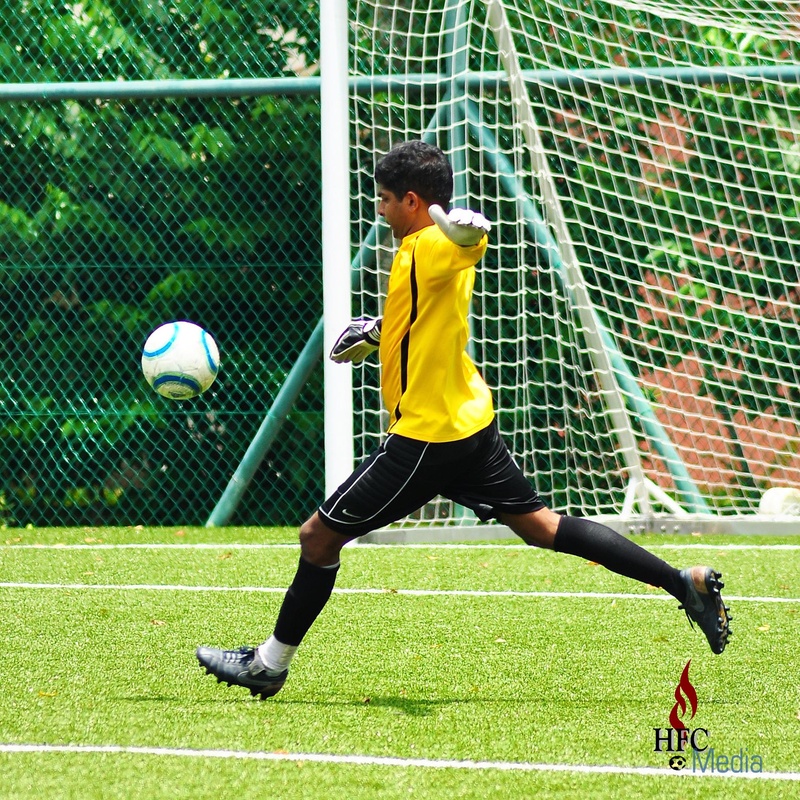 Veteran goalkeeper Gopal Peethambaran’s heroics secured Hilderinc FC their first win in the new season, at the second time asking, when they held on to earn a 2-1 against Vintage FC in the ESPZEN FA Cup Round of 32 tie.

After their shocking start in the league two weeks ago, the Blacks were determined to bounce back against the ESPZEN Saturday League team, and in their first FA Cup game after a three year hiatus from the competition.

While the return of Azman Azmi and Leslie Eng, both playing their first competitive game after months away from the game, along with the debut of Russian Denis Lobov, provided a festal feel, the late withdrawal of Shuichi Narita and Elric Das brought the Blacks to the drawing board for some readjustment.

With Sunny Tharidu anchoring from deep in the midfield, just ahead of the defensive quartet of Azman Azmi, Denis Lobov, Nicholas Ledenmark and Alex Wong; Rama Witjaksono and Philip Vahn were tasked to provide the means for the forward trio of Ian Morris, Gabir Nabil and Sashikumar Mahathevan, as the Blacks looked for a positive start.

However, like their previous game, the Hilderincs were cagey off the blocks, allowing quick pressure from the younger Vintage side, who looked to use their youthful vigour in the opening minutes.

With the defence called into the duty from the on start, the Blacks slowly found their feet moving forward, though patchy at times, gained reasonable control of the keenly contested tie.

After coming close on a couple occasions, when Gabir Nabil came within inches of opening the account, the Blacks were awarded a penalty for a handball offence.

It took two attempts with the penalty, after the referee curiously ordered a retake, but it was purely academical as the Egyptian goal machine picked his spot with both his kicks.

Having taken the lead, the Blacks were forced into the midfield tussle, as both teams found themselves locked in a tug of war.

Still looking defensively uncomfortable with huge kicks from the opposing goalkeeper, the Blacks struggled at times with the long ball tactics and had keeper Gopal to thank for when he pulled off a double save to deny an equaliser against the run of play.

However, it was the Blacks that created the most goal scoring opportunities, coming close with efforts from Gabir Nabil, who could have had a hat trick, Rama Witjaksono and Philip Vahn, amongst others.

And having scouted their opponents and done their homework on them, the Blacks were well planned to frustrate with their tactics and deployment, keeping them in check, with Sunny Tharidu, Azman Azmi, Alex Wong and Denis Lobov, exceling in their assigned roles.

Taking a slim advantage into the second period, the Hilderincs opted for a progressive alteration to the team, first bringing on Leslie Eng, for his first competitive game, after missing the whole of last season, but full credit to the HFC legend, he rarely missed a beat on his return.

As with the first half, the Blacks were at the right end of the pitch, looking to open the gap between themselves and their opponents, and the came close with an intelligent loop by Gabir Nabil, clipping the post before rolling across the face of the goal.

Gopal Peethambaran was called into action once again when he pushed a goal bound freekick over the crossbar to maintain status quo.

David Zheng, who was finally relieved of his makeshift fullback duties for his natural midfield role, came within a whisker of putting the Blacks ahead when his shot whizzed past the post, with the keeper stranded and well beaten.

The Hilderincs finally doubled their lead when Denis Lobov’s long pass forward was well received by Gabir Nabil, whose experience and guile allowed him a prefect brace and the Blacks, their hankered second goal.

Despite the two goal lead, it was not plain sailing for the Hilderincs, who had to content with extended periods of Vintage probing, and an Ian Morris mistake nearly costed the Blacks a goal, but with the ball put over the bar from close range, it saved the skipper the blushes and a rollicking, had it gone it.

A half fit Logaraj Sundram, who had a sporadic cameo, could have put the tie to bed had he kept his header down after he was felt unmark and in acres of space.

However, the Blacks, imperious in defence, switched for a second, and allowed a needless goal for Vintage FC to pull back, settling up a tense finale.

Knowing that a draw would send them through, based on the ESPZEN FA Cup rules of a handicap given to teams from lower divisions pitted against a higher one, Vintage FC, threw everything they had to level the tie.

The Blacks, defending a series of corners, hailed the heroics of their Man of the Match goalkeeper, Gopal, when he tipped a powerful shot over the bar as his game saving injury time sealed the victory for the Hilderincs, progressing them to the next round, where either Division 1, Purple Monkeys or Saturday League, Division 2 side Victoria Jomo FC awaits them.

Though not a vintage performance by any means by the Blacks, it was certainly an improvement, having learnt from their mistakes from the last game.

While the new season is still in its embryonic stage, more progress will be needed by the Hilderincs, especially when the campaign is turning out to be a tough and unpredictable one.