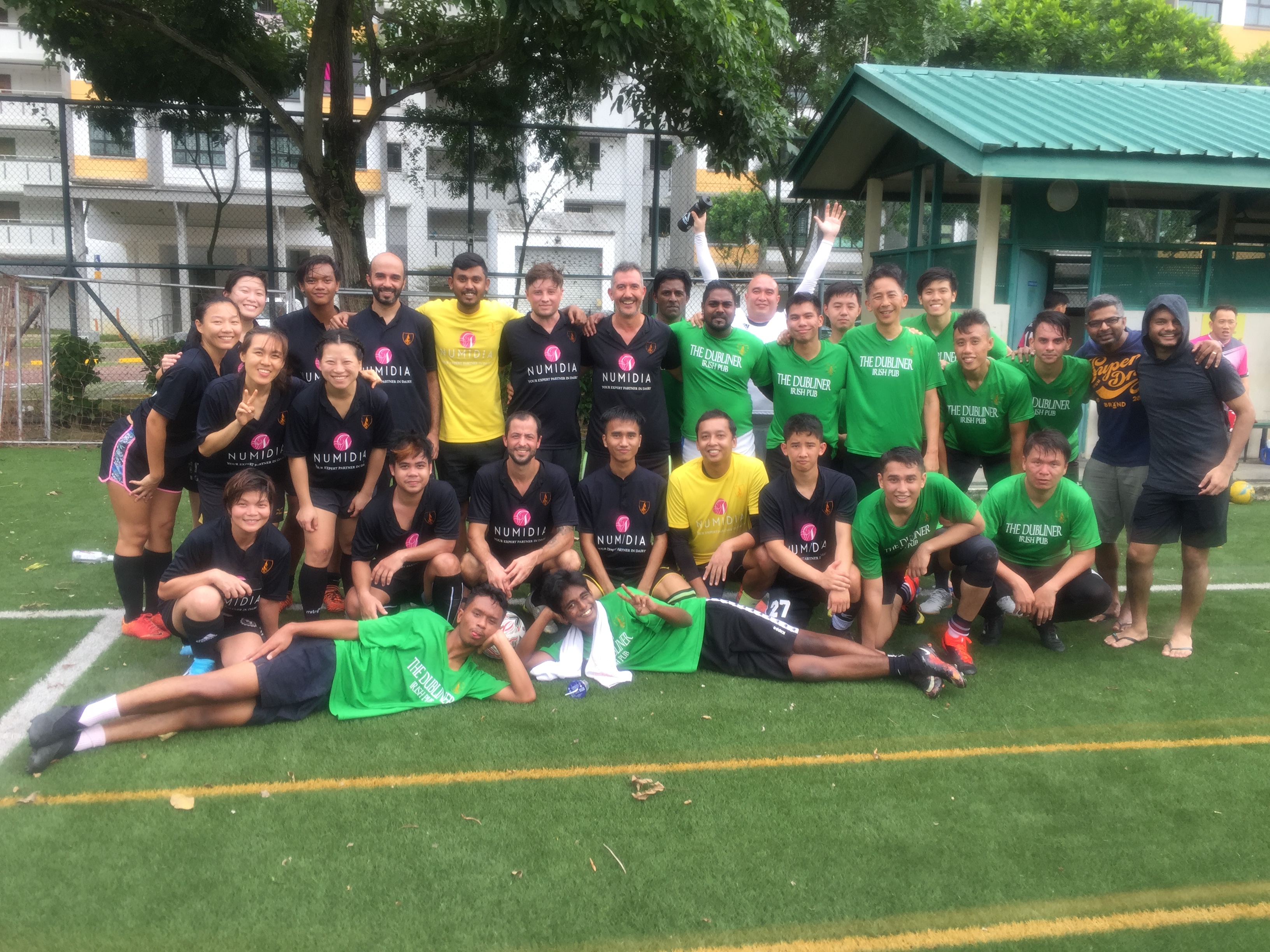 With 2020 significantly special for Hilderinc Football Club, the Blacks kicked off the year long 20th Anniversary celebrations with Hilderinc FC, the Saturday side, bolstered by the Hilderinc Ladies, taking on Hilderinc Twā, the Club’s Sunday team in a commemorative “within the family” friendly game.

Besides the occasion, the bragging rights as to who is the loftier of the sides was always going to be on the agenda for both camps, and more so for the Hilderinc FC, who were yet to taste victory in the past two similar additions; first in 2015 when they came short against the HFC All-Stars (former players) in a 15th Anniversary charity match, and in 2017 when they came short against the newly formed Hilderinc Twā, which also saw the involvement of the Hilderinc Ladies for the first time.

Added significance was given to the proceedings as it was also the first time a father and son pairing took to the pitch as Ryan Ng and his dad David were fielded, albeit in opposite sides, while Marc Trotter and Nina Li became the first couple to play for the men’s side, truly giving it a special feel.

Evenly setup, both sides were quick off the mark, seeking the early initiative against the other, but the three week end of the year collective recess was evident as the start was patchy rather than poised, though Hilderinc Twā, playing in their away green kit, had the perfect opportunity to take an early lead inside 3mins, only for Aamir Fikri to comically lose his footing when it mattered most, much to the amusement of those present, though the droll self-trip in a competitive game would have brought a different reaction from the touchline.

Ironically, the next best chance would fall to the same player, and yet again the youngster missed the target when he was on the money to find the back of the net, letting his “parent side” off the hook, and not everyone was smiling this time around.

It was highly inspiring, that two of the Hilderinc Ladies, Belle De Leon and Nina Li were the likely outlet to opening the scoring for the Blacks with the chances that came their way; the former almost finding herself at the end of a brave diving header and the latter displaying her shooting prowess, regularly witnessed during the Ladies’ Wednesday football sessions.

The Ladies contingent continued to excite with Lim Yuan and Ashley carrying on the impressive approach as their worked hard to influence the game in their given positions.

However, it was Hilderinc Twā who would take the lead before the break when Nabil Zahrif picked Gary Choo with a floater, and though the forward looked miles offside, he kept his composure to put the ball into the back of the net.

With a goal adrift, HFC decided to pull all the stops in the 2nd half, as they set out an attacking side to get themselves back on parity before the final quarter of the game.

Addressing the issue, the Blacks but the Twā on the defence with their high press, forcing a tilt to the first half flow.

The game, now confined deep inside the Hilderinc Twā’s half, dogged defending and inspiration goalkeeping by Club President, Simon Khaw, who was in rousing form, first tipping Fahmy Barker’s goal bound shot over the crossbar, but Naithan Reheja was highly unfortunate to not to score when his header from the resultant corner was cleared off the line and onto the woodwork by Basil Al Barr.

Having seen Gabriel Magalhães narrowly miss with his attempt, the Hilderincs thought they had levelled the game when Bali Kavi found himself at the end of an Ian Morris cross, but with his header heading into the top corner, Simon Khaw pulled off an exceptional save to deny the forward a proper goal.

And just when it was looked like it was not going to be their day, HFC finally broke their brothers’ resolve when Gabriel Magalhães finally levelled the score with a move he had started, rounding the keeper after been found by the ever impressive Ryan Ng.

Into the last quarter of the game, the game remained on par following the combination of wasteful finishing by Ian Morris, and the determined endeavour of Simon Khaw in goal as the Blacks unleashed the full complement of the Ladies alongside the menfolk.

However the Club President was hard-done to be beaten for the winner when Samuel Lalramnghaka bulldozed his way into the heart of the Twā backline before slamming in his goal to finally break Hilderinc FC’s hoodoo.

Notwithstanding the final result, it was a perfect day for the Club as they look to carry on the festivities throughout the rest of the year with more such events planned to celebrate 20 years.

A feat incomparable, considering the fact that the Hilderincs are not resembled by any common denominator of any particular race, school, affiliation, location or any other comfort zone many teams are formed with, but with players from all walks of life, culturally and ethnically diverse with inclusivity the core value highly held, and while some may boast in the trophies they may have won, but only to disappear from the scene after a while, the Blacks continue to grow in substance and strength, demonstrated by the over 100 members across the Hilderinc FC, Hilderinc Ladies and Hilderinc Twā sides. Now, that is a reason enough to celebrate.