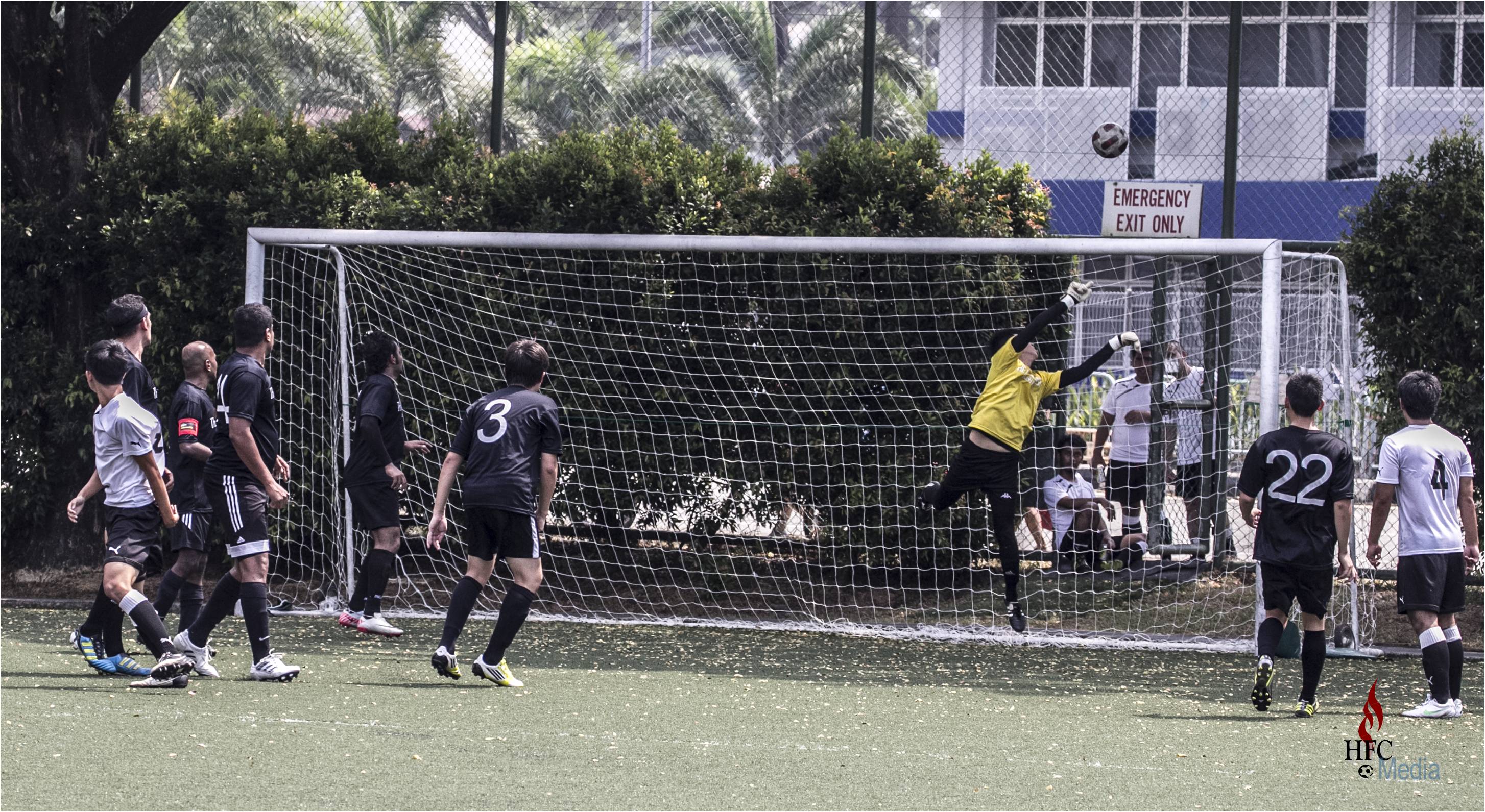 With no less than seven unavailable players to contend with, a much reduced Hilderinc FC side produced one of their dogged performance against rivals Club M FC to clinch all three points in an important win in the ESPZEN Saturday League 20 Division.

Considered direct challengers for the season’s honours, the game was a vital concern for both these sides’ ambitions, and with the reverse fixture comfortably going to the Blacks, Club M were eager to prove their worth, starting the game accordingly.

However, anticipating their opponents’ intent, and considering their own limiting in numbers, the Hilderincs adopted a more pragmatic approach as compared to their usual quick offensive pass and move football.

Not having their normal two players to each position, the Blacks were an altered outfit with Sunny Tharidu sitting alongside Nicholas Ledenmark, and flanked by Sergey Darovskikh and Shiv Tulsianu, while veteran defender Kavin Singh, playing his first competitive game for the campaign, took on the Number 6 role, as they sacrificed the attacking prowess of Mika Michalowski to partner Diogo Baptista in the heart of the midfield.

Weathering the initial storm, the Hilderincs, as planned, progressively started to find their way deep inside Club M’s half, and with quick inter-passing, forced their opponents into conceding needless freekicks in and around the final third.

Testing the backline with their set pieces, the Blacks found their way through when Nicholas Ledenmark’s floated ball fell to Mika Michalowski after a short pinball, and with Aamir Fikri diverting the header towards goal, the keeper’s clanger allowed the forward to put the Hilderincs ahead in the 13th minute and keep his impressive scoring run going.

Rattled by the deficit, Club M pulled all the stops and increased their tempo, forcing the Blacks into a defensive posture, however, with committed defending from all quarters, the Hilderincs kept them at bay, especially with keeper Lim Yong Kiat in imperious form, denying the opponents with assured saves, seeing through the rest of the half, and taking the slim lead into the break.

Having failed to crack the Hilderinc fortress, Club M went direct from the restart, and with scant resources, the Blacks were content to soak the pressure and try to break on the counter-press.

Although the strategy was somewhat an alien one to the normally expansive Blacks, the formidable character displayed in the face of lack was key to a truly passionate display, though truth be told, the proceeding could have been more interesting had Club M had shown better finishing on a couple of occasions when they did get the ball behind the solid black wall.

And while there was a fine line to between the Hilderincs gritting out a narrow win and allowing the opponents back into the game, matters was settled in the 67th minute when Nico Olvera ended the tie as a contest when he put the ball into the back of the net from a yard out after his intelligent back header from a Nicholas Ledenmark floater which bounced off the crossbar and dropped kindly at his feet.

While the Blacks had to professionally see off any late comeback from Club M, who were constantly seeking a way back, the exhausted Hilderincs completed a remarkable display with full plaudits.

Though not their fluid self, the Blacks showed that they can win ugly, especially considering the limitations, and it will certainly form another building block after last week’s testing game in the ESPZEN Champions Cup, but with feet firmly planted on the ground, the Hilderincs will set their hearts to prepare for another examination of their credentials against new boys Mexcian Aces next Saturday.