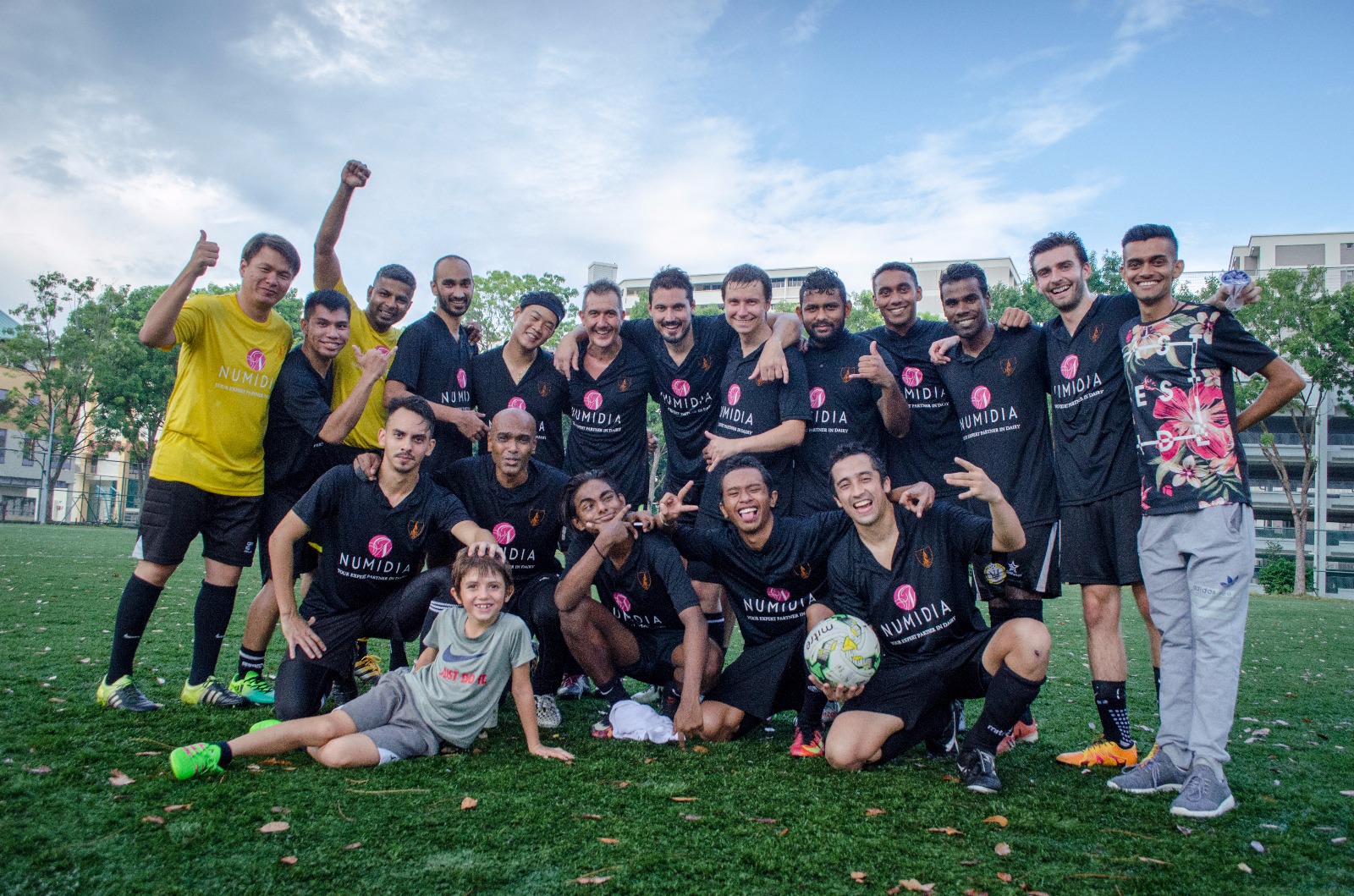 “Wait for the wisest of all counsellors, time.” -Pericles

Hilderinc Football Club finally ended their long wait for the league title when they were crowned Champions of the ESPZEN Saturday League 19 Division 3 when they put aside Hiadis FC in the final game of the season.

With the late withdrawal of Hibernians Athletic from the league last month, and the confusion surrounding the mathematics of the league table sorted out only a couple of days prior, having started two points behind Super Aviators before kickoff, the figures were simple – only a win will hand the title to the Blacks.

Even with the absence of the likes of Adi Ravikumar, Diogo Baptisa and Omar Mahnin, and couple of late withdrawals, the Hilderincs were mobilised with quality and strength, welcoming back Sebastian Eraso and Glenn Sandhu back for the final push.

Despite the fact that Hiadis had given them a credible challenge in the reverse fixture earlier in the campaign and the zero margin for any slip-up, there was a quite confident in the camp.

And if there were any nerves present, they were swiftly put at ease when a quick touch play with Ian Morris sent Cristian Peligros through and goal and the Blacks’ undisputed Player of the Season needed little effort to open his account for the day inside 2mins.

However, despite having little to play for, Hiadis FC put on a professional display, and though sustained attention from them was measurably dealt with, it was unnecessary in most parts, and the Hilderincs were made to work hard to maintain their lead.

Progressively in the second half of the first period, the Blacks regained control and possession of the tie just as the rain came down, making the slick pitch advantageous for their quick passing game.

Working the ball from defence to attack, the Hilderincs should have doubled their lead after Basil Al Barr sent in a delightful ball across the pitch to Aamir Fikri, but will time and space on his side, and to the astonishment of many, the young forward shot wide with the goal gaping.

But within two minutes a lightning counterattack from defending a corner, Ian Morris and Cristian Peligros combined again with a deft one-two before the Hilderinc number 7 buried the ball into the bottom left corner for his 20th league goal of the season, giving a comfortable outlook going into the break.

To counter the expected pressure from Hiadis FC at the restart, the Blacks reorganised the midfield, and it proved to be a masterstroke as the defensive quartet of Nicholas Ledenmark, Dionisis Kolokotsas, Basil Al Barr and Glenn Sandhu forming a watertight rampant, Veranthan Arumugan, Jon Loh, Sebastian Eraso and debutant, Nico Olvera were unplayable alongside Cristian Peligros.

Within eight minutes into the second half fine work from Basil Al Barr on the left allowed Cristian Peligros to dink the ball to Nabil Zahrif, who applied the finishing touches with aplomb.

The three goal advantage eased any burden, allowing the Hilderincs to play their usual free flowing game, with some if the best one touch football seen in the HFC colours.

The Blacks thought they had put the game to bed with an exquisite football involving Varanthan Arumugan, Sergey Darovskikh and Nabil Zahrif, who laid a peach from Nico Olvera to find the back of the net, but the referee chalked off the finely worked move for offside, one in number of dubious decisions in the afternoon.

Yet, barely three minutes later the game and the title were put beyond any doubt with another flowing passage of play with Sergey Darovskikh finding Cristian Peligros with a weighted ball for the Spaniard to force his way into the box before putting the ball into the back of the net for his hat-trick, an incredible sixth in seven league games.

The Blacks were given some anxious moments when goalkeeper Gopal Peethambaran suffered an injury, but the veteran was determined to play through the pain in the momentous game.

And while a clean sheet would have added some polish to the Hilderincs’ day, Hiadis pulled a goal back against the run of play when a freekick found the net courtesy of two unwitting deflections.

However, Liao Jincai, who had only entered the play pulled off a save worthy of champions to deny Hiadis FC another goal, tipping a dipping shot over the crossbar.

Immediately on the front-foot, the Blacks were awarded a penalty when Cristian Peligros was bundled in the box, but having never missed from the spot, the Hiadis keeper applied the slightest of touches to deflect the ball against the post to deny him his fourth.

Still the Hilderincs made it a five-star performance when Cristian Peligros turned provider for Nico Olvera to benefit from the keeper’s mistake to score on his bow with virtually the last kick of the game.

With the final whistle sparking long overdue celebrations, all past shortcoming and heartaches were replaced with elation because after years of near-misses, the pieces finally fell in place and lady luck at last smiled on the Hilderincs; and certainly the wait made the success even more sweeter.