Hilderinc FC On The Brink! 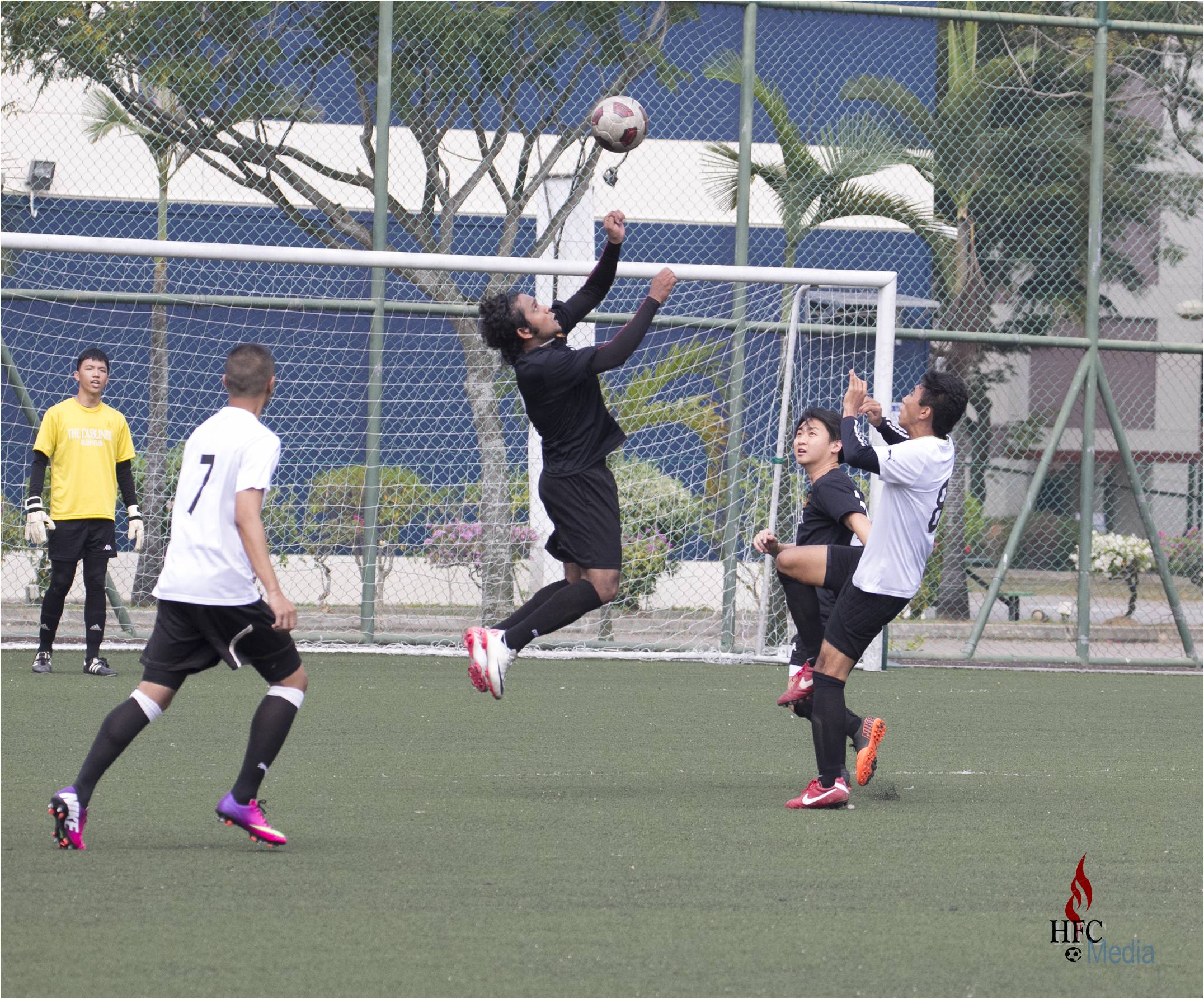 Any fears of their season derailing after their unanticipated glitch against Graduate Soccer Team two weeks ago was laid to rest when Hilderinc Football Club took a huge stride towards the ESPZEN Saturday League Division 3 title when they triumphed 3-0 over Super Aviators in the top of the table clash.

Having prevailed by the same scoreline in their earlier meeting, the Blacks were mindful of any enthused response from the Hawks and altered their midfield to counter any possible escapade, especially with several regulars missing.

And as anticipated, the Aviators were quick off the blocks and the Blacks had keeper Gopal Peethambaran to thank when his quick reflects kept them from going behind to an early goal, setting the inspiration for the rest.

Reversing the initial trend, the Hilderincs came close to the lead when goal-machine, Cristian Peligros headed Ian Morris’ corner across the face of the goal, and within seconds the Spaniard returned the compliments to the skipper but saw his header glance past the post.

And the duo were in the thick of the action once again after Ian Morris sent Cristian Peligros through on goal, and the latter’s deft touch over the keeper fell agonisingly close onto the roof of the net.

With the Blacks in constant movement, both with and without the ball, youngster Aamri Fikri send a weighted ball to Cristian Peligros, and with the forward drawing a foul just outside the box, set himself for the only recurrent outcome, sending a non stoppable shot past the goalkeeper to take the lead.

Indicative of a top of the table title clash, the Aviators replied with a good contest in their efforts to draw parity but with the Blacks’ defensive quartet of Nicholas Ledenmark, Dionisis Kolokotsas, Sergey Darovskikh and Adi Ravikumar in formidable form, the untested midfield of former Malaysian professional player, Varanthan Arumugan, Basil Al Barr, who highly impressed in his first competitive role in the middle of the park, and an imperious Sunny Tharidu, who was having a game of his life, were in complete control of the proceedings.

Despite making his bow, Varanthan Arumugan was a constant livewire and he duly made his mark by providing a measured assist to Cristian Peligros for a typical calm finish to extend the Hilderincs’ lead past the midway point.

With just seconds left on the clock before the break, the Blacks’ previously watertight backline was finally breached with the Aviators finding a rare route behind the defenders, and with the ball sent across the face of the goal, but a last ditch intervention by Adi Ravikumar ensured that the planned half-time team talk remained unchanged.

Following the high tempo endeavours of the first period and with a two goal lead, the Hilderincs scaled back some of the pace, willing to take more attention in half while working on the break.

With a centreback pairing with almost 90 years in combined age, veterans Dionisis Kolokotsas and Kavin Singh were inspirational, winning everything between themselves.

However, inviting pressure was always going to come with nervous moments and though most were well dealt with, it needed a Sergey Darovskikh clearance in front of the goalmouth to maintain poise.

Progressively and appropriately, the Blacks reverted to their more accustomed tune of pressing from the attacking third, though a more direct approach nearly paid dividends when Varanthan Arumugan’s sortie behind the Aviator backline and subsequent shot clipped off the crossbar.

With under 6 minutes left on the clock, Aamir Fikri who had an exceptional game, responding well after being left out in the previous game, capped his performance with a wonder strike, only for the goalkeeper to somehow deny the teenage a quality goal.

But the Blacks sealed all three points and extinguished any lingering Aviators resolve from the resultant corner as Cristian Peligros bullet headed Ian Morris’ set-piece for his hat-trick and 18th league goal in an astonishing season where he has bagged 32 goals in 10 games, inclusive of friendlies, and that with one game still remaining.

The gritty display was personified by another Gopal Peethamabaran save and by heroic defending by Kavin Singh and Sergey Darovskikh who both threw themselves to deny a late goal in the dying minutes, especially when goal difference might come into consideration in the larger scheme of things.

Notwithstanding official confirmation on latest developments, the Hilderincs are not expected to take their feet off the gas going into their remaining game against Hiadis FC as they set their sights on the prize.