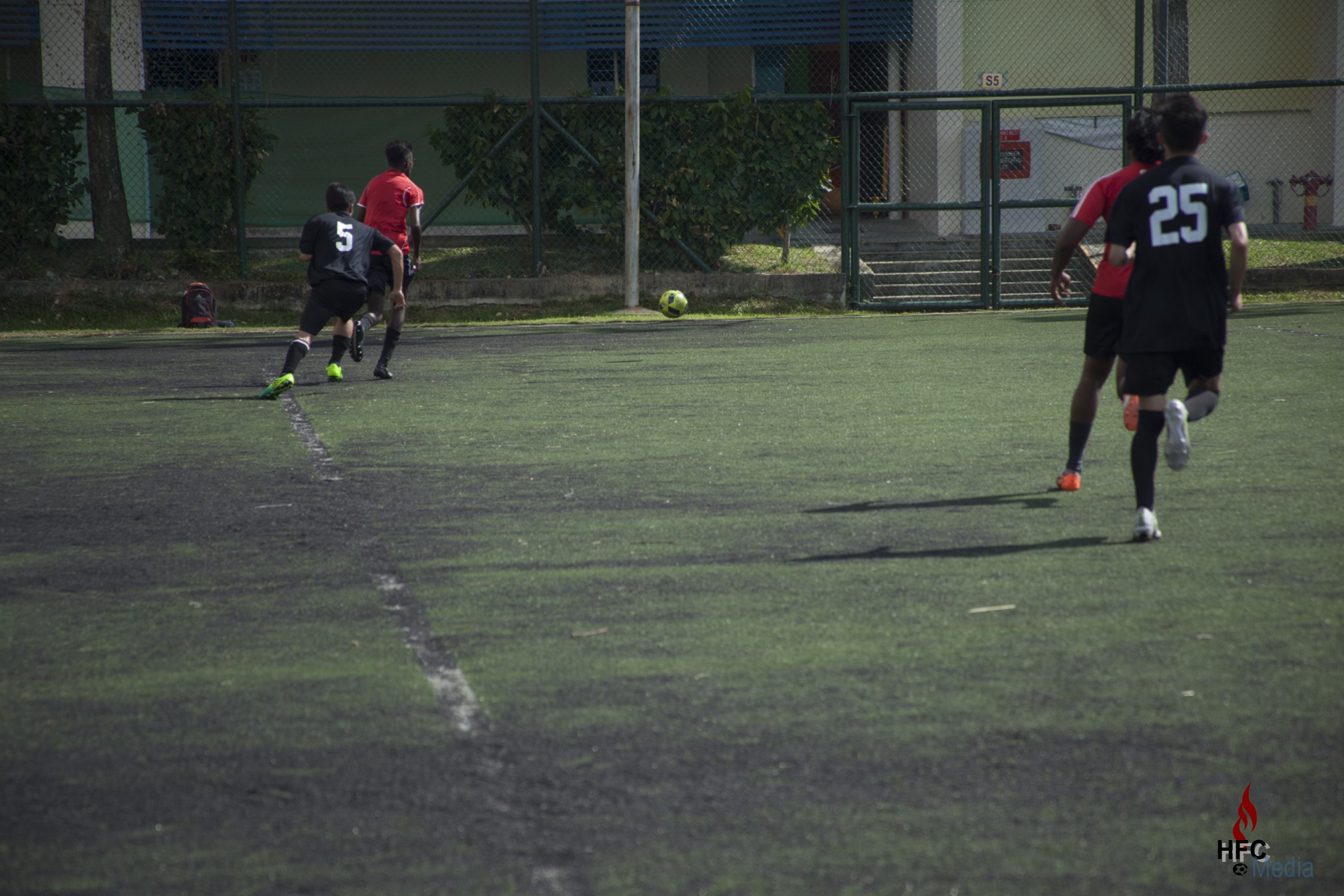 Despite the Hilderincs’ desire to go full swing in the league, especially after last weekend’s canter against GST, administrative reasons meant that a friendly was on the agenda instead.

Ever the optimists, the Blacks took the opportunity to refine any chinks and trial variations in view of a long campaign, as well to deal with the fasting month which will render several players temporarily unavailable.

While numbers were credible, conditions at an exposed Naval Base Secondary School pitch meant that the afternoon’s contest was going to two-fold, one against the elements, and the other against AFC Naranja, an all too familiar opponent with whom attention-grabbing sub-plots have been customary.

However, with the weather not allowing attention for extra-curricular interest, it was full focus from the Blacks as they sought to impose themselves from the start.

And within four minutes, the Hilderincs were in front, somewhat fortuitously, when Ian Morris’ pressure on the Naranja backline resulted in the goalkeeper’s attempted clearance cannon off the forward’s shoulders and into the back of the net, akin to recent trending James Milner and Marcos Alonso goals.

Though the initiative and purpose was with the Blacks, a casual lapse caught them flatfooted and gave the opponents an underserved, but well-taken goal after just seven minutes of going ahead.

Bridled with annoyance, the Hilderincs started to force the issue once again, gaining control of the game.

But just as the Hilderincs were in their stride, an unfortunate injury to Mitchell Keh took all attention and concern, and rightfully so as the forward could face some time on the sidelines after his right knee buckled, leaving him in excruciating pain as he was withdrawn.

As an alternative, the Blacks brought on sixteen year old Amir Saarin, though raw at times, good potential for the future.

Picking up from where they left off, the Hilderincs soon were rewarded with the lead after Cristian Peligros got himself in on the act, heading in an Ian Morris’ cross following measured build up by Rama Witjaksono, Sebastian Eraso and Melvin Tan.

Within two minutes, Rama Witjaksono, who is usually extra enthused in this meetings, split open the Naranja defence to find Cristian, who did not a second invitation, as he double his tally by picking his spot at the top right corner.

It could have been a quick hat-trick for the Spanish forward when he all but looked to finish off a pinpoint pass from Kumaresan Maniam, but an extraordinary save from the stand-in goalkeeper kept him at bay, who in fact produced another excellent quick save from Dionisis Kolokotsas after a resultant corner.

There was no stopping Cristian Peligros and his third triple in as many games when he smashed in the Hilderincs’ fourth on the turn to give the Blacks a 4-1 lead into the break.

The second half was more orchestrated from HFC, as they worked to counter the elements as well as the opponents who offered more as a contest, though both sides were tepid at times as they sought relieve from the muggy heat.

In keeping with to the objectives, the Blacks offered alternatives to several midfield positions, though Danish Saarin’s injury coupled with Mitchell Keh’s in the first half reduced options in the attacking third, while Nicholas Ledenmark, Dionisis Kolokotsas and Glenn Sandhu held the fort at the rear without reinforcements to give them any sort of reprieve against the Naranjas, who had more than desired forays into the defensive third.

On a constructive note, Mathew Joseph, who was fitted in an untested deep laying defensive midfield role, proved to be a huge hit as he played his part admirably in the grand scheme of things.

While the opponents’ high line provided ample opportunities for the Hilderincs to overrun the scoreline with good interplaying pass and move football, Cristian Peligros’ fourth on the day was the only tangible count, though Mike De Bear had an effort ruled out for offside, while Dionisis came within another header to register to first goal for the Club.

With the Hilderincs progressing as a unit and still yet to hit top gear, especially against higher caliber opposition, all efforts now are only parts in an overall puzzle that is slowly being worked.