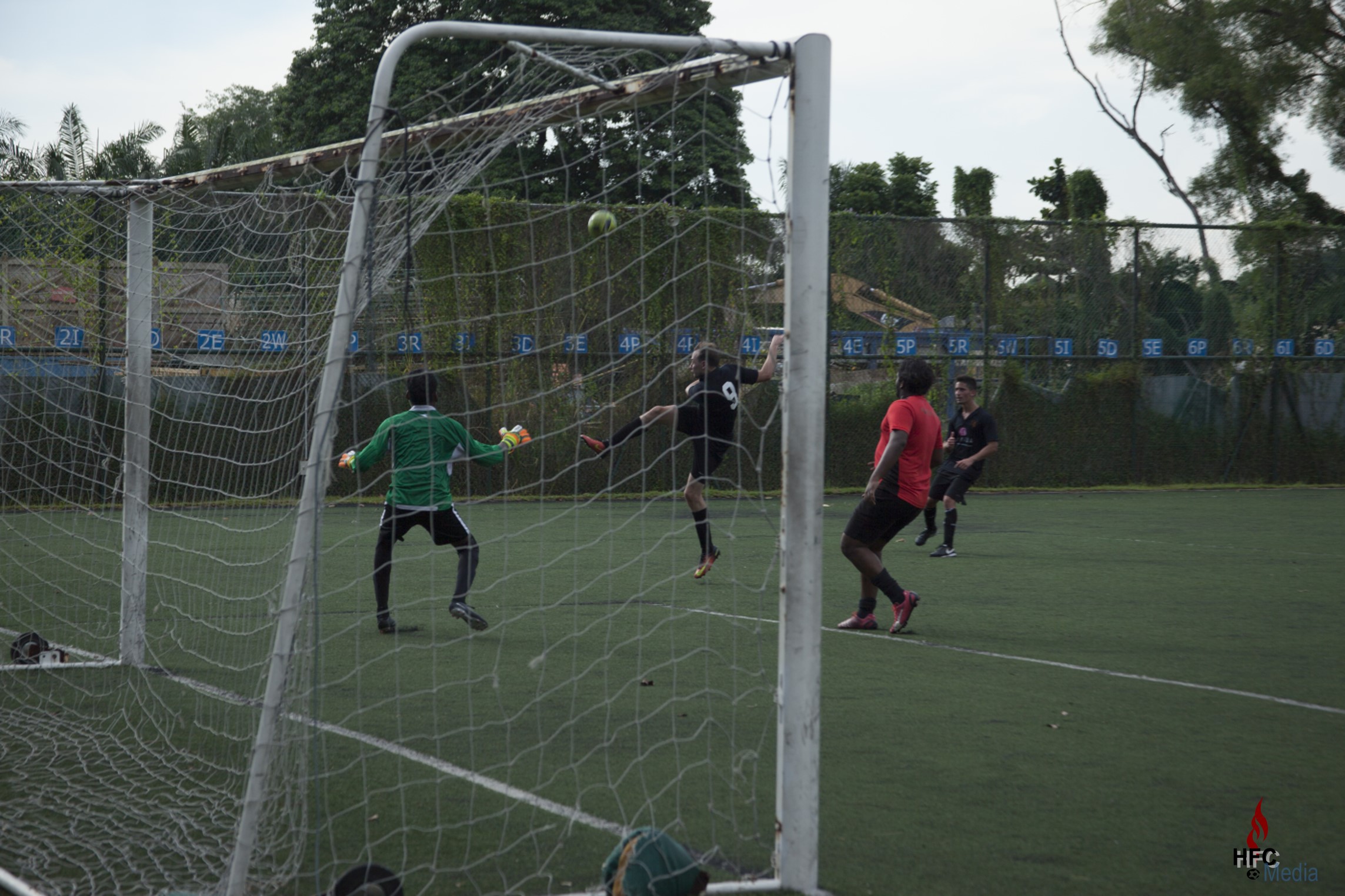 After two thunderstorms induced false starts, though a latter was satisfied with a walkover win over Hospitality FC, Hilderinc FC finally got their ESPZEN Saturday League started proper with a rearranged match against Graduate Soccer Team after their initial fixture was washed-out a month ago.

Having suffered crippling matchday numbers the last five months, the Blacks turned up in formidable strength as a host of players returned to the fold after a lengthy absence, much to the delight of many.

The three month competitive layoff was evident as the Blacks started the game tentatively, especially with the returning Hilderincs feeling their way back as the mainstays shore them up.

While the last season’s Division 5 champions were eager to impress with the early forays, the Blacks progressively started to stamp their mark on the game, with Cristian Peligros proving a handful for the opponents with his direct approach.

Following the warning salvo, the Blacks took the lead inside 15minutes after Nicholas Ledenmark, in a carbon copy of last Saturday, picked out Cristian Peligros with a long range pass, and just as a week ago, the outcome was the same as the Spaniard picked his spot, sending the ball into the back of the net in off the post.

Having netted five on his Saturday debut a week ago, Cristian Peligros should have added his second after Omar Mahnin’s picked pass, but with the goal at his mercy, the Blacks’ number seven sent the ball wide, to the astonishment of both sets of players.

After further attempts from the forward and Kumaresan Maniam, the Hilderincs doubled their lead after a quick counterattack which resulted in Cristian being fouled, and with the GST players protesting, the big Spaniard stepped up to tuck in the spotkick with easy with 3minutes remaining on the clock before the break.

And within 90seconds of the restart, Cristian Peligros completed his hat-trick when he profited from a quick pass from Dionisis Kolokotsas, before almost casually slamming the roof of the net from close range.

Though the Hilderincs took an unassailable three goal lead into the second half, they could have ended the tie as a contest had they finished off the chances they created in an all-round fine team display.

If the first period was somewhat a trot by the Blacks, the restart, as expected, was a different proposition as GST, seeking a way back into the game, turned on the intensity.

Consequently, the Grads found an added adversary in the referee after their number 63 was sent off after a second booking just after 5minutes, provoking intense remonstration from a side which felt hard-done by, which unfortunately would be their gripe from then on, a fact not aided when they felt they were denied a penalty when the ball struck Mathew Joseph’s arm, though the midfielder had little knowledge of the travelling projectile.

Despite the assumptions, video replay does give credit to the official who got most of his decisions correct, and for the Hilderincs who were at the end of some torrid refereeing judgment last season, it was a welcomed relief.

However, though the opponents down a man, the presumed injustice motivated them to throw caution to the wind and press the Blacks, who failed to take control of the game despite the advantage, turning the tie to a back and forth affair without poise.

The final twenty minutes would take on a life of its own, after GST pulled a goal back against the run of play after the Blacks were caught flat-footed.

Not intimidated, the Hilderincs almost returned the compliments when Omar Mahnin came close with a fantastic volley which cannoned off the crossbar for what would have been a goal of the game.

The Dutchman again be the focal point minutes later when he was fouled inside the box, earning a the Hilderincs their second penalty of the day.

Amidst almost anarchic scenes when GST were reduced a man further after the defender was sent off for pushing the referee, Ian Morris dispatched the penalty to restore the Blacks’ three goal advantage.

Infuriatingly, GST reduced the deficit straight from kickoff; the Hilderincs paying the price for inattentiveness.

However, the Blacks’ high press ensured that there was little threat to the Hilderincs’ backline in the closing stages as they show off the challenge, but not without unnecessary excitement.

Though not pretty at times, especially with several getting back into gears after a long recess from competitive action, this win sets the platform for a good campaign, if the Blacks maintain the matchday numbers to complete.