Blacks Five On A Canter 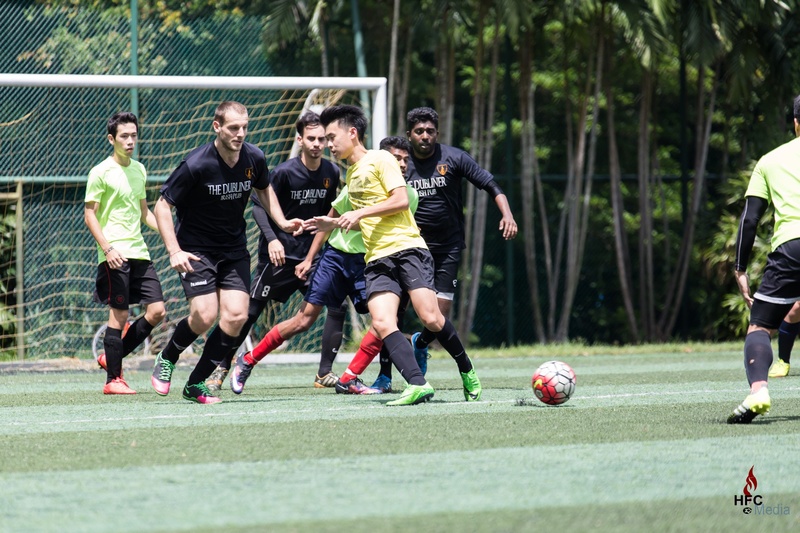 Following some curious scheduling by the League planners, largely induced as a result of the recent inclement weather, Hilderinc FC were given a null weekend ahead of the traditional three week end of the year break, putting the brakes on a season just when it had started.

Taking the opportunity to void a prolonged recess, the Blacks took on Lambda FC in a friendly game, their final match of 2016.

Adding meaning to the fixture was the fact that Lambda FC was helmed by none other than the Blacks’ very own Lim Yong Kiat, who was taking his foray into management with his fledgling but developing faculty team, while the rehabilitative return to action by Mitchell Keh from injury, albeit in the colours of the opponents, pleased the Hilderincs to good measure.

After last week’s dramatics, the Blacks were keen to apply the lessons learned while reshuffling the lineup to add greater depth and changeability amongst the solid core.

And leading the pack was Benoit Herbuat, who just moments before kickoff had announced his plans to return home in the coming year, making the day even more significant for the Blacks as the Frenchman was made skipper in what would likely be his final game for HFC, hence an impromptu testimonial.

If the previous Saturday started in breakneck speed for the Blacks, it was complete opposite as both sides took a more calm and measured approach, clearly emphasising the meaning of a friendly tie.

Despite a completely different backline from which that started last week, the likes of Benoit Herbuat, Parthiban Aruchamy and Michael De-Bear were well complemented by debutants David Dubinski and keeper Dylan Khalid, both whom had highly impressive bows, and looked comfortable with working the initiatives from the back.

With Michael Rooke and Rama Witjaksono pulling the strings peerlessly in midfield the attacking front of Mathew Joseph, Rahmat Saring, Khaled Harnavin and Omar Mahnin, looked lively and purposeful throughout.

It took the Blacks less than three minutes to lay down the gauntlet with Mathew Joseph and Khaled Harnavin playing their part, the latter adding to this CV with another prefect cross, for Rahmat Saring to volley in the opener.

While the likes of Mitchell Keh was always going to be a handful, the Hilderincs handed the threat effectively, limiting the opponents at large to speculative attempts.

At the other end, the Blacks came close to adding to their advantage through Mathew Joseph, Omar Mahnin, Rahmat Saring and Khaled Harnavin, all coming mighty close, but were either denied by Lim Yong Kiat, last ditch defending or were just shy of hitting the target.

However, when the Hilderincs did increase their lead before the break, it came straight from an audacious cornerkick from Rama Witjaksono, who fooled everyone by picking his spot at the far post.

As expected, there was far more intensity from Lambda FC at the restart, but the Blacks, who had mixed it up at the break, were well poised to deal with the renewed intentions, though the opening minutes did see some uncertain moments, which added some unwanted excitement from the Hilderinc prospective.

After having been foiled by Yong Kiat, who denied Michael Rooke and Sam Thorley with creditable saves, the Blacks had to turn on the style for the third goal with a sweeping move from inside their own half to involve no less than five players before Khaled Harnavin, again turned provider for Logaraj Sundram, who despite his current injury setbacks proved that he was still a top striker with his quality finish.

If the Hilderincs’ third was a well worked goal with all its pomp, their fourth had a fortuitous note to it as an Ian Morris corner met Sam Thorley’s shoulder before being put into the net by an unsuspecting Lambda player.

For all his trying throughout the time he had been on the pitch, Sam Thorley finally got his name on the scoresheet with a long range daisy cutter to put the icing on the cake for the Hilderincs’ fifth.

Though the tie virtually was wrapped up, both the keepers were called to action with quality saves, denying any further additions to the tally in a profitable friendly game for both teams with both their objectives met.

While the Blacks put out to pasture the next three weeks for the Christmas and New Year holidays, motivation will still be high for the first game of the 2017 against Son of Pitches FC.