Blacks Held In Wash-out Second Half 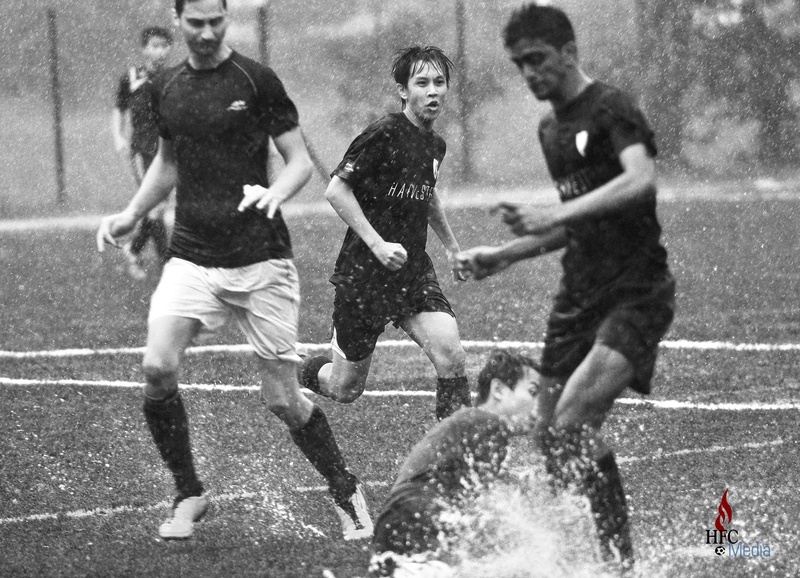 New found ESPZEN Saturday League bedfellows, Hilderinc FC and Club M FC remained inseparable after a rain-soaked afternoon when they squared off in the second innings of ahead of the start of the new season.

Having kicked-off their pre-season programme against Club M FC in a ten goal thriller just under two months ago, the Blacks were back locking horns, looking to do one better against a commendable opponent.

With the last encounter between these teams still fresh, the opening minutes were tentative as both sides were obdurate in their approach, eager to cancel each other out at every turn, though the Hilderincs looked a little cagey when on the back foot, though the opening chance of the match fell to the Blacks when debutant Michael Be-Bear went inches from connecting with a prefect cross from Azman Azmi.

The Hilderincs were forgiven for their clamour when Michael Rooke looked to have given them the lead with a looping header which bounced off the crossbar unto the Club M stand-in keeper, and stick between himself and the post refusing to give a clear indication if it had indeed crossed the line or not, and with goalline technology here only a stuff of fantasy, it was up to the referee to call it no goal.

However, the heavens soon opened up and reduced what would have a keenly contested game been into one that relied on the unpredictable, as both teams struggled with getting anything meaningful in the midst of all the slip and slides.

There was no randomness with game’s opening goal though, as slacking marking by the Blacks allowed Club M to smash the ball, literally through the net, leaving the Hilderincs dumbfounded under the pelting downpour.

It did not take the Blacks too long to respond, when Benoit Herbuat, who was returning to action after a lengthy injury spell, delivered a fine through ball from his own half into the Club M box, only for the defender to handle it for a clear handball decision.

Despite the lashing rain, Sam Thorley was calmness and focus personified as he dispatched his spotkick without a doubt to level the score.

By this time, it was all about the players fulfilling, perhaps their deprived childhood desire of playing in a thunderstorm than any logical reason of carrying with a football game in such ghastly conditions.

Soaked to the bones with boots and the pitch filling up with water, it was a curious case of playing against the elements more than each other, as both Hilderincs and Club M went into the break, hoping for a reprieve from the storm.

With the rain unrelenting and if conditions were bad before the recess, it was exacerbated twice the level as both teams returned to a badly water-logged pitch, which had semblance more of a paddy field than one for football.

Needless to say, the pitch would deny the Hilderincs their lead when Omar Mahnin’s, what would have been a certain goal at any other day, shot got stuck in the puddle with the keeper flatfooted.

And as the rain eased, the Hilderincs regained some level of control, and though still navigating “strategic” waterlogs laboriously, Sashikumar Mahathevan and Sam Thorley were unfortunate to see their efforts on goal kept away by last grasp reactions by the Club M keeper.

However there was no denying Omar Mahnin a second time, as the Dutchman duly punished the custodian for dropping an Azman Azmi cross, reacting quickest to give the Hilderincs the lead.

On the other hand, with the resumption of the rain, the Blacks’ gullibility returned as well, as for reasons unknown, they repeatedly kept playing the ball into the puddle in front of their defensive third, inviting unnecessary pressure from the opponents, especially after the Hilderincs were reduced to ten men following Azman Azmi's debatable red card for dangerous intent. .

And needless to say, they were meekly punished with a Club M leveller late in the game, forsaking another win.

While the thunderstorm might have disintegrated the cohesion and game plan, the Hilderincs will need to show more conclusiveness, especially in difficult conditions, and these are precisely the reasons pre-season friendlies are vital.