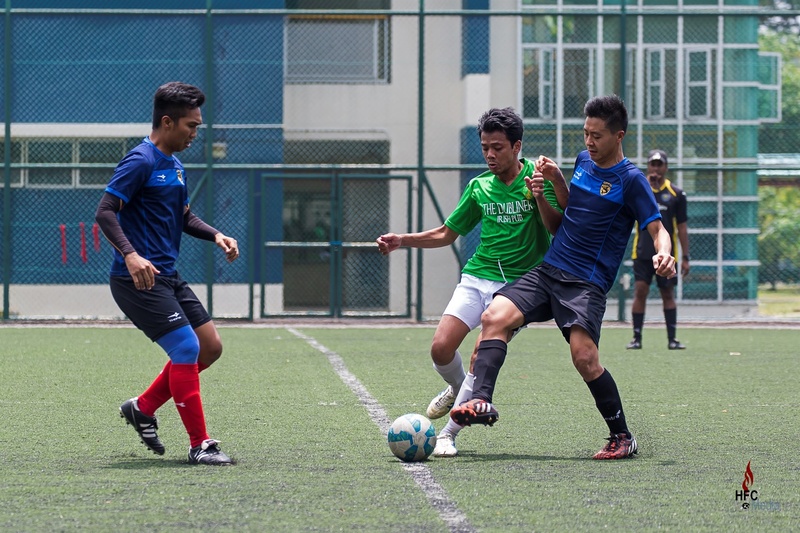 With about month to Hilderinc FC’s debut in the ESPZEN Saturday League, it was a less than fluid display by the Blacks as they had to settle for yet another draw in their continuing pre-season curriculum.

Craving out enough opportunities to comfortably settle the outcome without any doubt, the Blacks were culpable for wastefulness in front of goal and inexcusable of errors at the back, in a game that was interspersed by ridiculous shenanigans by the opponents and strange dealing by the referee(s).

While several regulars were missing, it was an occasion for others to step in to gather valuable match fitness, along with experimenting on different formations and set-ups, as the Hilderincs geared up on their objectives.

Having started the game brightly, the Blacks were at their best when they kept true to their pass and move football, keeping the lid on Ipin FC, though the latter tried to find a loophole in the Hilderinc defence, well marshalled by Wong Yih-Khai, Kavin Singh, David Zheng, and the returning veteran, Azman Azim.

The midfield, consisting of Indonesian duo, Bayu Tanmizi and Rama Witjaksono, joined by Englishman, Colin Thornley, who would go on to make an impactful debut in more than one ways, were at the heart of everything the Hilderincs were doing, with the first chance of the game falling to Bayu, who came close with a near post header off a classic Kavin Singh throw-in.

And it was Kavin Singh’s long throw that opened up Ipin FC, allowing Ian Morris to cut the ball back for Rama Witjaksono to delightfully find the topmost corner to give the Hilderincs the lead in the 12th minute.

It was almost total control of the game from thereon by the Blacks, who prodded further to extend their lead, with Rahmat Saring and Bayu Tanmizi coming closest with several chances.

It was than a great mystery as to why the Hilderincs, for reasons unknown, other than the lack of fitness and ill-discipline, allowed Ipin FC to, undeservingly, snatch an equaliser against the run of play.

Slavishly giving possession away in the defensive third, the Blacks, now a bag of unnecessary nerves and uncertainty, mark contrast to moments earlier, were fortune to remain on parity, though any pressure from the opponents was only at peripheral levels, but made to look good due to the Hilderincs dramatic loss of focus and confidence.

If the dip in the Blacks’ mid-match form was puzzling, the match referee’s added to the mix when he exchanged matches with the official on the other pitch, after deciding that following a flashpoint over at the other game, it was more worthy of his attention, hence the strange referee substitution before the break.

As it was in the last game, the Hilderincs, with a glut of defensive options, began the second period with a new set of backline, with Sunny Tharidu, Shubhang Aarora and Nicholas Ledenmark joining the action along with Liao Jincai in goal.

It was the usual start from the Blacks, who spent most part of the restart inside the Ipin half, and were unfortunate to have not regained the lead with couple of efforts before they were denied by a dubious refereeing decision after Rahmat Saring, who missed a sitter earlier, had put the ball in the back of the net but was ruled off-side upon receiving the ball from Ian Morris in the built-up.

But the persistent forward, who was constantly banging on the doors of Ipin FC, was repeatedly denied by the goalkeeper, and could have scored a hat-trick with the number of chances that fell his way.

While there was no suggestion that the opponents were capable of anything signification despite sporadic attempts on goal, slack marking and a goalkeeper howler handed Ipin FC, another undeserved goal, and this time the lead.

If going behind a goal in the most infuriating manner was not bad enough, the Blacks were reduced to ten-men when Colin Thornley was sent off for retaliating to a shameless reaction from one of the Ipin defenders, leading to a melee.

Though soured by the undignified reaction of some amongst the opponent, the Hilderincs had one last throw of the dice when Rama Witjaksono, pouncing on a loose ball, unleashed a long range shot to claw the Blacks from an inglorious forfeiture.

While a defeat would have done some damage even at a pre-season stage, the Hilderincs need to address the many of individual mistakes that keep hindering them in recent games, especially from winning positions.

With three more friendly games coming up before the start of the new season, it will vital that the Blacks address this swiftly.