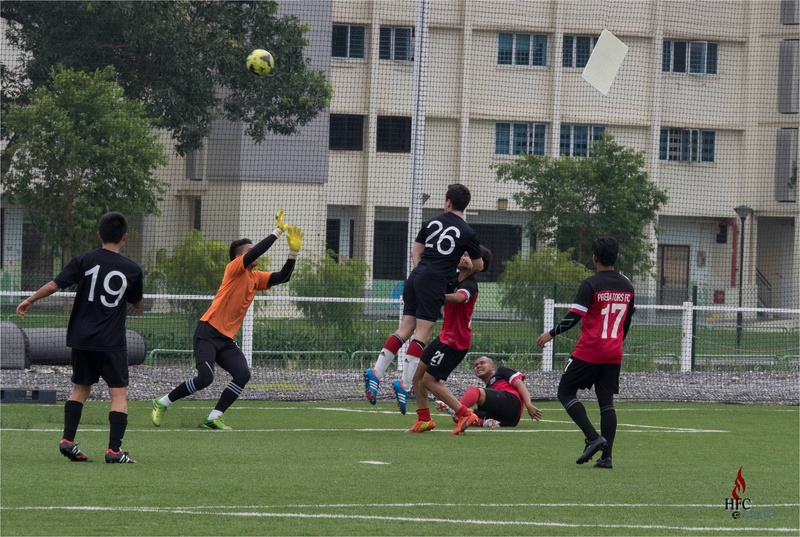 It was a thrilling 5-5 draw for Hilderinc FC as they officially kicked off a new era as a Saturday football team against, Club M FC, at Merlion Sports City.

Opting for more stimulating approach as supposed to their previous progressive pre-season programme, the Hilderincs had serendipity to thank for as the pitted against a fellow ESPZEN Saturday League side, giving them the perfect opportunity to preparation themselves ahead of the new season.

If playing after a two week break against a team that was already in the business end of their campaign was going to be tough enough, the Blacks’ efforts were made more challenging when they were forced a rethink their game plan after both Omar Mahnin (ankle) and Denis Lobov (hamstring) were withdrawn inside the opening five minutes, with the veteran Russian facing a lengthy spell on the sidelines,

Notwithstanding the disruption, it was a quick and positive start for the Hilderincs, who wasted little time to hit the ground running, with Sashikumar Mathathevan, who himself was returning after a two month layoff due to a groin injury, having an early pop at goal.

It would take a special goal from Sam Thorley, who laid the foundations for a man of the match performance with a stunning freekick, which will certainly be in the mix in the new goal of the season list, to give the Hilderincs the lead just moments later.

Within five minutes the Blacks added to their tally after Sashikumar Mahathevan calmly finished off a pinpoint long range pass from midfield toiler, Rama Witjaksono, to give the Hilderincs a comfortable cushion.

However, for strange reasons, mid-game water breaks have always been a bane for the Blacks over the years and it had it effects yet again as they allowed Club M to pull level following sloppy defending to cancel out their lead, while they can rightly count themselves fortunate not to go behind before the break, owing only to some weak finishing from their opponents.

Despite the blip in the latter part of the first half, the Hilderincs were again the positive starter of the two, as Rahmat Saring was first to test the Club M keeper very early in the restart, while Sam Thorley nearly cracked the crossbar with another freekick that could have rivalled his earlier strike.

Just when it looked comfortable, the Blacks took their eyes off the ball, and found themselves two goals down behind, punished again for their inattentiveness.

But not wanting to dwell long in handicap, the Hilderincs poured forward and were rewarded after Sashikumar tabbed in from close range after Sam Thorley’s attempt was parred into his path.

And within minutes Sashikumar Mahathevan sealed his hat-trick with a carbon copy of his first goal, latching onto Parthiban Aruchamy’s huge dropkick, putting the Hilderincs back on level terms.

However, Club M responded in kind immediately from the restart, regaining their lead, giving the Blacks no time to savour their parity.

With time ticking away, the Blacks had one last salvo to rescue the game, and it came from Sam Thorley’s defence splitting pass to Michael Rooke, which the debutant duly obliged with a well taken goal on his bow.

While the Hilderincs were feeling the full effects of a two week null, the unforgiving weather and obvious deficiency in match fitness, it was a fruitful outing with several regulars returning to action and encouraging debutants given the opportunity, though long term injury to Denis Lobov will take some shine off the objectives of the day, early signs point to exciting times ahead.