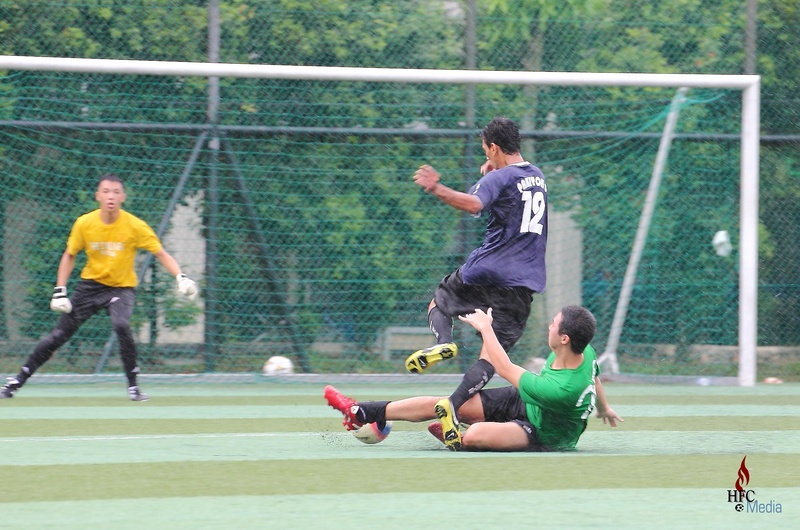 Hilderinc FC produced a positive outing in their stop start campaign with a tensely fought win over The Legacy FC, keeping their hopes of a top three finish alive as the weird season draws to a long overdue conclusion.

Dogged by inconsistencies and self-inflicted critical errors, the Blacks have produced as many delightful moments as horrendous one in equal measure, in a Division which has seen its fair share of bewilderment, especially when two teams withdrew mid-season, plunging the fixtures list and league table in disarray.

In a tie between the current bottom two teams, placing for pride replaced the traditional relegation threat as any potential drop from Division 4 has been alleviated due to the aforementioned withdrawals, though the Hilderincs were still within the top half of the table, hence the significance of all maximum points in their remaining games.

Despite the Blacks, with several debutants to the inimical 11am kickoff, and playing without any natural fullbacks in the side, were sprightly off the blocks, eager to stamp their intent from the go.

Satoki Yoshida, a makeshift wingback, was first to fire the opening salvo with a long-ranger, which whisked agonisingly past the post in the first 90 seconds.

But the Japanese midfielder needed just another 45 seconds to find his mark with another belter, a certain goal of the season contender, to put the Hilderincs ahead inside three minutes.

If HFC’ goal was a crowd pleaser, The Legacy’s equaliser a mere two minutes later was a catalogue of ghastly comic error, which the Blacks failed to find the funny side of, as it exacerbated their recent inclination for undue charitably unforced errors, benefitting unearned opponents.

In a topsy-tuevy opening, the Hilderincs could have regained the lead almost immediately, but for Ian Morris, culprit of several missed chances in the game, failed to punish The Legacy’s sloppiness, adding to the Blacks’ build-up of tentative nerves.

Never one to do things the easy way, the Hilderincs conceded a ludicrous penalty, but were fortunate that The Legacy keeper smashed his spot-kick against the crossbar, though Lim Yong Kiat had stood tall to have had covered the shot regardless.

With untried formation, deployed in view of the lack of fullbacks, not producing the required stability, the Blacks brought on Chua Yuxuan, himself a makeshift defender, in a tweak to the set-up, and the change nearly produced instant dividends from the Hilderincs.

Adib Alias and Sam Thorley, now with better support on either sides of the flanks, regained control of the earlier patchy midfield, and the latter was unfortunate to see his attempt cannon off the upright after he waltzed his way into the The Legacy box and had the keeper well beaten.

While the initiative was with the Blacks, they had Lim Yong Kiat to thank for after he produced a world class save to keep them in the game.

Constant pressure from the Hilderincs was finally rewarded through Denis Lobov, who headed in his third goal in as many games, to give them a welcomed lead, going into the break.

As the sun decided to exert its influence on the proceedings, the restart was a laboured affair, especially with the Blacks sitting deep, inviting more than appreciated attention from The Legacy, who were seeking a way back into the game.

However, the longer the game went on, the Hilderincs resumed normal service, keeping themselves positioned in The Legacy’s half, coming close against through Sam Thorley, who struck the woodwork on the other end with his freekick.

Toiling under the full assault of the weather, the Blacks crossed over the line and made sure of all three points when Rahmat Saring added the third in the dying minutes of the game with his tenacity, applying the finishing touches to his initially blocked shot, much to the delight of the Hilderincs.

Two important but massively tough fixtures against Singapore Panthers FC and Oooglee Boys FC await the Blacks, as they count down to the end of their season in the ESPZEN Sunday League.