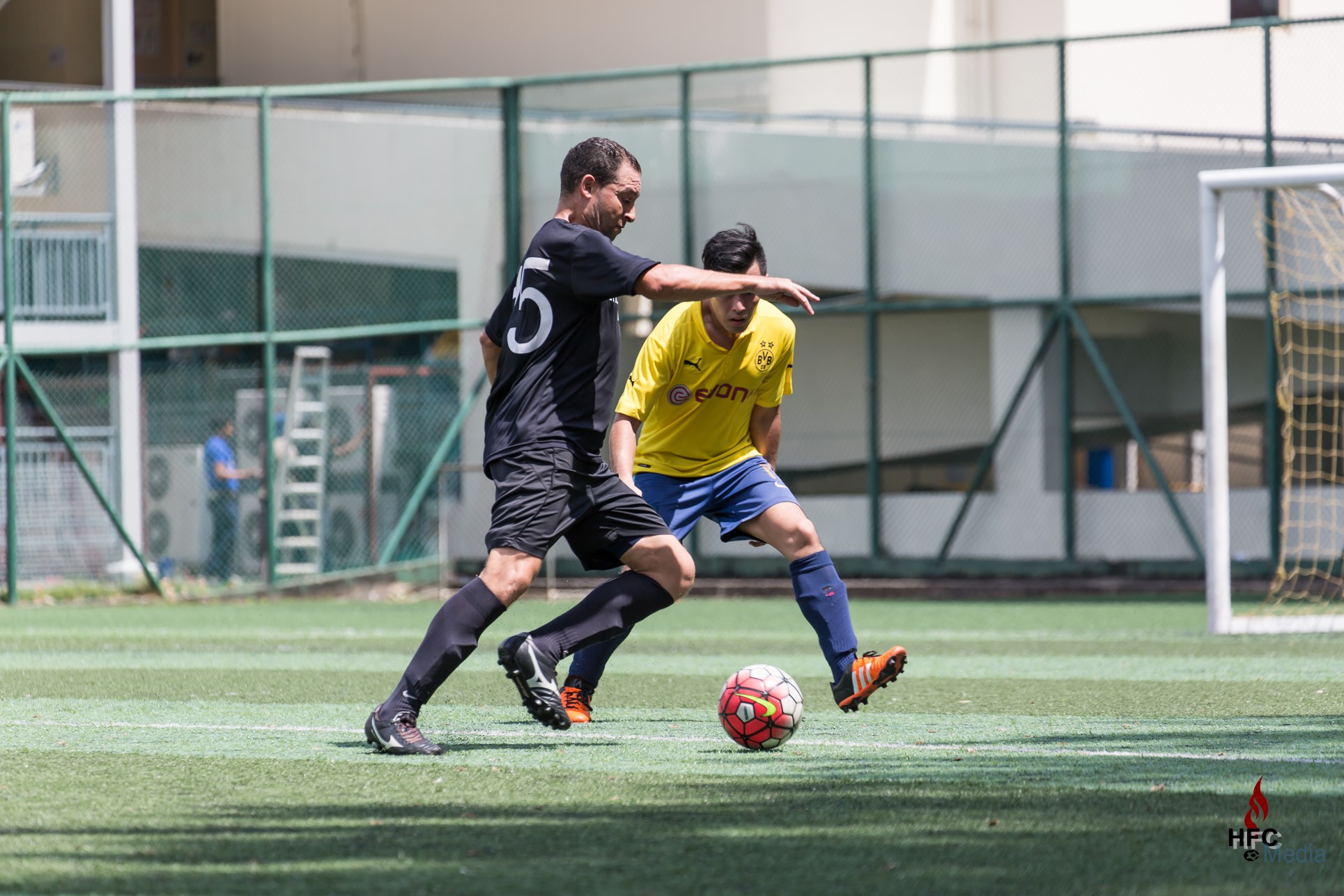 Hilderinc Football Club hit back immediately from last week’s bamboozling defeat against rivals, Predator FC, in the most dramatic of fashions when they hosted the same in a quick return fixture.

Laying to rest several demons that had been niggling them in a curious campaign, the Blacks produced, arguably their best performance to date, as they came back from the death to snatch all three points, finally demonstrating their famous audacity against recent meek displays.

Having had their objectives rocked by last weekend’s undeserved defeat, the Hilderincs had only one thing on their minds as they sought all three point, least the face a real prospect of a drop with games running out.

While the agenda was laid out clearly, it was a nervy start from the Blacks, as aberrant individual decisions in the opening seconds could have punished them, but were fortunate to get away scot-free.

Settling themselves, the Hilderincs were quick to test the Predators as Sam Thorley’s long range effort was palmed away as it looked to be sneaking in, as effort from Rahmat Saring and Bayu Tanmizi set the tone for the game.

Squaring-off again in space of seven days meant that both teams were tentative with their approach, though the Blacks showed more adventure as they tried to capitalise on a Predator side that was starting without couple their regulars, especially in defence.

Taking their opportunity, the Hilderincs finally got their reward when Skipper for the day, Denis Lobov, turned the ball into the net from a corner which the Predators failed to deal with under intense duress.

Although Gabir Nabil could have added the second for the Blacks, sloppy defending allowed Predator FC to pull level, making a real contest of the tie, going into the break.

With the second half starting with the backdrop of intense dark thunder clouds, the Hilderincs wasted little time exerting their intentions early, keeping the opponents pinned in their own half, though questions abound if the inclement weather would have its say on the match.

However without any consideration to the plans of the heavens, the focused Blacks prodded through and were delighted to regain the lead when Gabir Nabil, off a quick thrown in, lofted the ball for Omar Mahnin to beat the keeper with a lopping header, as he opened his Hilderinc account.

While the Blacks could have added a third of even a fourth, the referee finally lost his patience with the incessant lightning and decided to halt the proceedings with safety his main concern.

As both teams regrouped under shelter with different agenda’s dominating their impromptu pep talks, the referee felt safe enough to call them back onto the pitch, resuming the tie with warning of an abandonment should the weather turns.

Extraordinarily for the Blacks, the recess seem to knock the stride off them, as they laboured in total contrast to prior the time-out, and were stunned to see their lead pinched from under the noses by two quick goals that left them staring at another painfully cruel defeat, while the Predators glee at the upturn of their fortunes.

With mere ten minutes left on the clock, it was now or never for the Hilderincs to save their season amidst repeated adversity.

Grinding every sinew of their exasperated muscles in the pouring rain, the Hilderincs encamped the Predators, going for the jugular.

Industrious throughout the game, Nicolas Scribe and Rahmat Saring made their mark when the former released the nippy forward, who baring towards goal was cluttered by the onrushing keeper, earning a penalty.

Gabir Nabil, who tucked away the spotkick against the same keeper made no mistake again as he pulled level with a precious goal.

With a draw not enough in the larger scheme of things, Hilderincs were determined to take back all three points with whatever it took.

Sam Thorley, who had a shot saved in the early minutes of the game was in excruciation along with his fellow Blacks when his goal bound freekick was denied by the fingertips of the Predator custodian.

The final minutes were a pulsating display of true grit and determination from the Hilderincs, who looked possessed with extra vigour defying the sapping conditions.

With barely a minute left, Ian Morris’ lofted ball deflected of a Predator and fell all so kindly onto the path of Gabir Nabil, who sealed all three points by calmly slotted the winner, sending the Blacks into raptures.

It was a classic but long overdue display from the Hilderincs, who have suffering some unworthy results this season, despite being the better team at times.

Although the feel good factor has returned to the camp, the Blacks will now turn toward league leaders, That Team, whom they will take on next with a dwindled midfield, but will bank on the spirit and attitude that they showed.