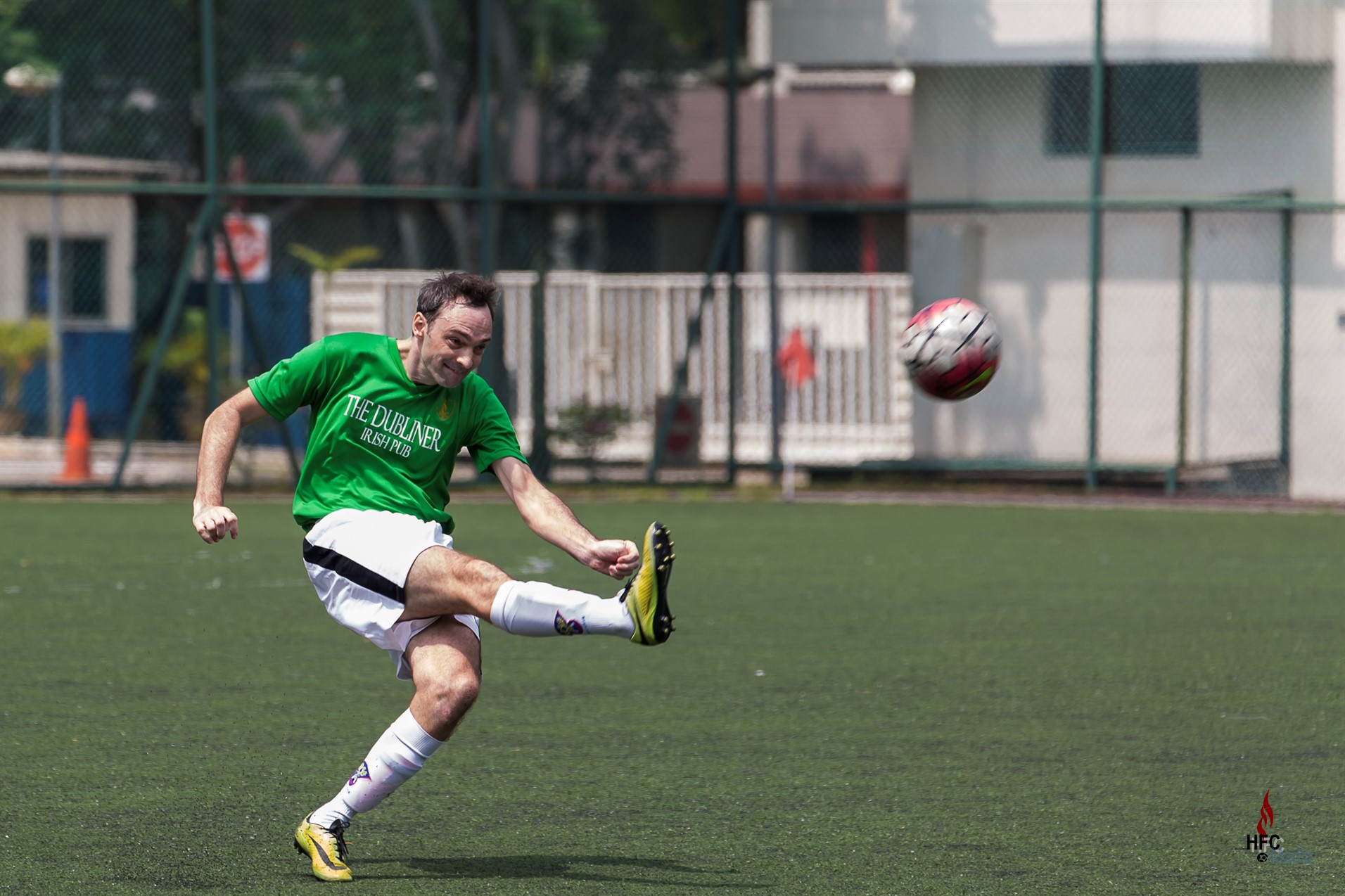 If there were any doubt about Hilderinc Football Club’s upward progression, the hard fought ESPZEN FA Cup tie against Division 3 Singapore Vikings would have firmly dispelled it.

Taking on a highly organised and almost professional Danes would have caused any team to buckle under some form of inferiority complex but the Blacks had none of that and proved to be warriors at heart by producing a magnificent team display, earning even the plaudits of a gracious opponent.

Taking the initiative right from kick off, the Blacks wasted no time in announcing their intention by going at the Vikings.

Not being bothered by the heavy pitch, the Blacks prodded at the Danes backline looking to find cracks to exploit.

Against all logical odds, it was the Blacks who looked the more dangerous with the forward line looking increasingly potent with supplies from the defence and midfield working in tandem to get them into goal scoring positions.

With Kavin Singh rolling back the years, youngster Jimmy Ong showed what the future looks with both, along with Sunny Tharidu and Leslie Eng played a faultless game at the back, leaving Lim Yong Kiat little to do in goal.

Graham Henderson and Regis Cavalie, playing their hearts out in the engine room, worked well and constantly linking up with the attacking quartet of Leonard Chua, Frank Pintor, Mikhail Baiman and Vijay Ramadoss.

It was no surprise then that the first chance of the game would fall for the Blacks when a fine ball, well worked from defence to midfield, and played on to the attack in swift and efficient counter attack with Leslie Eng, Graham Henderson and Leonard Chua all involved heavily.

However, the Blacks were unfortunate to the see Vijay Ramadoss’ finish squirm past the post after all the hard work done.

Pinning the Danes in their own half for good periods, the Blacks continued their industry, collectively asking questions of their more experienced opponents.

In the same vein of proceedings, the Blacks went close again to opening the scoring when skipper for the day and HFC’s league top scorer, Mikhail Baiman watched in anguish as his shot went agonisingly wide.

From almost two goals up, the Hilderincs were cruelly dealt with by the referee after he awarded the Vikings a dubious penalty, confusing the notion of ball to hand with hand to ball.

As much as one could clamour about the refereeing decision, it was no doubt a result of a momentary lapse of judgment and indecisiveness on the Blacks' part which invited unnecessary pressure inside their own box.

Having nothing to do up till then, keeper Lim Yong Kiat was hard done to pick the ball from a well taken spotkick, though he almost kept it out after guessing to go the right way.

The Blacks, though feeling annoyed by the manner which the Vikings took the somewhat underserved lead, almost pulled level but yet again could not find that extra inch in front of goal.

The first half was to end with an appalling freekick by Ian Morris, one which certainly ranks amongst the list of the worst of them all.

The introduction of Jason Lu would spur the team on in search for the equaliser as they continued to press ahead.

Not lagging back, the Vikings brought on quality of their own for the second period, restricting the Blacks of their space and movement forward.

With the game now being played predominantly in the middle of the park, chances in the final third of the pitch was few and far in between for both sets of players, though the Blacks had more foray into the Viking half.

Subsequent inclusion of Daryl Wong, Jeevan, Logaraj Sundram, Keith Tan and Frank Pintor continued to inspire the Blacks in pursuit of the one goal that would take them through to the next round, courtesy of the handicap rule given in favour of them being a lower division team, though their performance failed to show they were anything close to being that.

In a fit of irony, for all the chances, clear cut or otherwise, the Blacks found themselves further behind in another cruel blow.

Defending a freekick, the ball took a wicked deflection of Kavin Singh's head to beat Lim Yong Kiat, who in all honesty, had nothing to do apart from pick the ball out of the net twice.

Even in what seem to be a lost cause, the Blacks failed to give up, pushing the Vikings to the very end, with Jeevan’s header from a Graham Henderson corner bringing the game to an end.

While losing the game by two fortuitous goals after limiting the opposition to just as many efforts on goal throughout the game was somewhat hard on them, the heroic effort and the spirit shown by each and every player present gives the Blacks genuine reason to be optimistic about their league season.

With the Vikings providing valuable opportunity to test themselves against quality opposition, the Blacks now turn their attention to next Sunday when they take on rivals Jurong Shipyard, in Division 7 action.