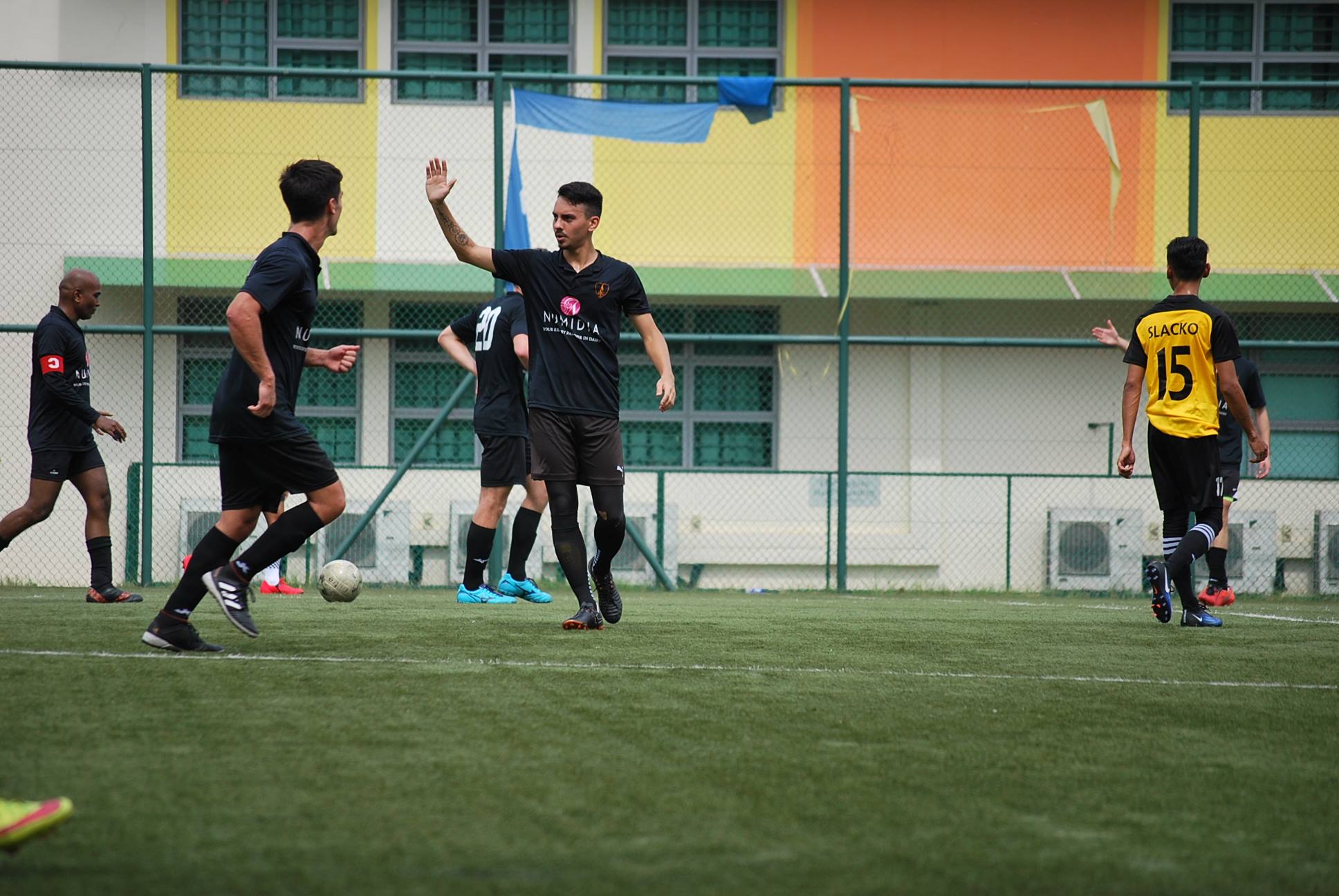 With the challenge for the ESPZEN Saturday Div 2 title almost mirroring the English Premier League with a point separating the top two teams, the Hilderincs’ preparation looked to have taken a huge blow when several withdrawals 24 hours before they took on Naughty Devils in a game they could ill-afford to drop any points, especially with the chasing pack too close for comfort while they kept pace at the top.

Limited to only three substitutes, the Blacks were all too aware of the of the tie turning into a potential banana skin if they were to take any misstep, and they were drilled pre-match to avoid any comfortable scenario at all cost.

Starting the game with focus, the Hilderincs were fluid and workmen like with their approach as they move in tandem, both with and without the ball.

Defending sporadic ventures of the Devils early on, the first effort fell to Mika Michalowski, who intercepting a poor goalkick, powered towards goal before unleashing a powerful shot, but was denied by the keeper who pulled off a point-blank save to keep the ball away from the back of the net.

With the steady backline of Dionisis Kolokotsas, Nicholas Ledenmark, Adi Ravikumar and Basil Al Barr, along with an assured goalkeeper Gowtham Durai giving complete trust and confidence, the midfield trio of Diogo Baptista, Jon Loh and Sunny Tharidu, were left to pull the strings, especially with the latter in his usual imperious self in excellent mop-up job, while Mika Michalowski, Aamir Fikri and Ian Morris were a constant nuisance with their high pressing in the attacking third.

The Blacks were deservedly rewarded for their hardwork with the opening goal when Aamir Fikri found the back of the net with a well-taken freekick which went into the back of the net after Dionisis Kolokotsas, who himself scored with a deceptive freekick just a week ago, played his part in confusing the goalkeeper, though the veteran felt a slightest of touched, but the review by the dubious goals panel proving inconclusive, the goal was awarded to the youngster.

Aamir Fikri almost made it two with a well-taken shot from a quick cornerkick, but with the goalkeeper flat-footed, the defender on the line hacked the ball clear of the line.

More importantly, it was the Hilderincs’ astonishing work-rate which was impressive as they drove every ball, while completely nullified any threat the Devils might have posed as they headed into the break in buoyant mood.

But with only a slender lead to protect, especially when in the reverse game they let slip a two goal advantage before sealing all three points with two late goals from Cristian Peligros.

And out-scoring the opponents not an option on the day, the Hilderincs were dogmatically shaped for the restart to counter any onslaught from the Devils.

Intentionally allowing their opponents to probe, the Blacks were happy to sit back and defend, with Sanil Khatri and Kavin Singh proving to be a wall deflecting very hoofed ball, while looking for the quick counter on the break, an alternative best used when numbers are limited.

While highly successful in breaking up play and limiting the opponents, the approached reached its usefulness when the Devil nearly drew level when a speculative shot hit the crossbar, and with an whole goal to aim at, the forward’s choice of a driving header was gratefully collected by Gowtham Durai, issuing a wakeup call to the Hilderincs for an offensive alternation.

Casting aside the tradition known formations, the Hilderincs looked impressive with each player performing his role in his position to produce a high level football collectively, though at some expense offensively, as Hernan Algarra found himself isolated after getting into decent position with his sheer persistence and silky handling of the ball.

Increasing the tempo, the Blacks swung the initiative back to their side and reverting to attacking the Devils, pinning them inside their half for good periods as they saw off any challenge to their lead affluently.

With their second clean sheet in as many games, the Hilderincs now demonstrate another side to their repertoire going into the business end of the season, and with no margin for errors, this could very well define their campaign and ambitions.