Hilderincs Bounce Back With Measured Display 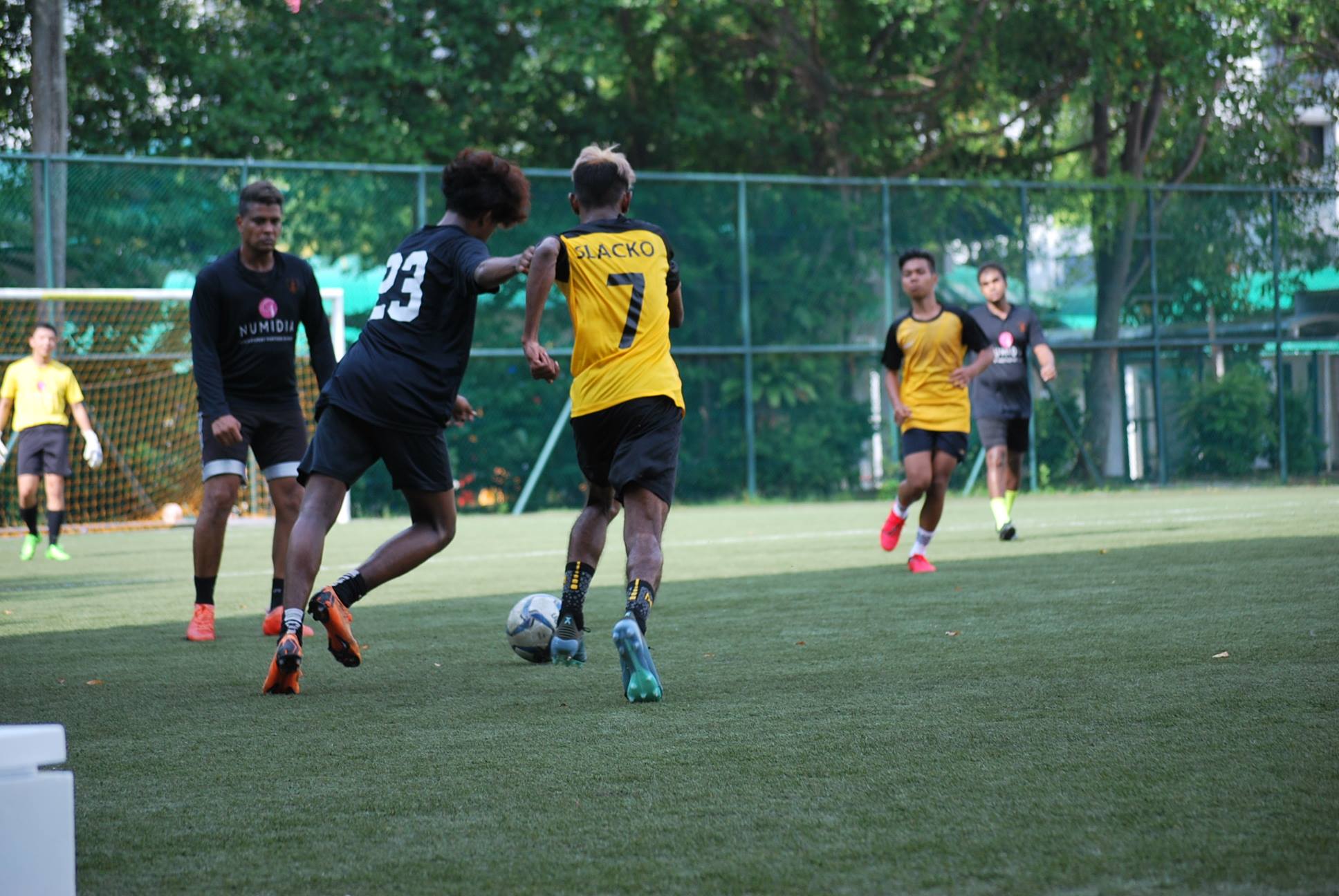 Hilderinc FC, still hurting from their sickening defeat in the top of the table clash two weeks ago, put the setback to bed in the most appropriate manner with highly purposeful performance to keep themselves on the coat-tails of the pacesetters as the season heads into the critical stages.

Already deprived of several mainstays for a game that will test the resources, the Blacks were put in further discomfort with couple of withdrawals hours before kickoff, however the late inclusion of Aamir Fikri and Sathayaraj Rajandran did well to alleviate the stress of limited options.

With a perfect response to the events of their last game the foremost yearning, the Blacks were ready off the blocks to take the game by its scuff.

Despite the absentees in key positions, the Hilderincs were prepared with able insurance in Shiv Tulsiani, who produced an inspiration display in both sides of the pitch in spite of his own prolonged unavailability.

After the early sizing of each other, the Blacks settled in fastest and within 10 minutes carved an opening for themselves when Cristian Peligros dangerously sent the ball across the face of the goal, only to have it cleared just before it reached Ian Morris who was waiting for a tap in.

Roles were reversed moments later when Ian Morris flicked the ball behind the defence and into the path of Cristian Peligros, and as the hitman’s header looked to have dropped into the back of the net, last ditch clearance from under the post meant that the scoreline was unaffected.

But within couple of minutes the Blacks were in front when Mika Michalowski showed extreme tenacity to pick Cristian Peligros after stealing a goalkeeper, and with the ball taking a deflection into his path, the Spaniard side-footed the opener into the bottom corner.

For all the elation, the Hilderincs, however, were dealt a setback when they had to withdraw heavyduty former Malaysian professional player, Varanthan Arumugan, due to an injury, a blow considering they had no more midfield options at their disposal, and had to re-deploy Mika Michalowski away from his favoured position in attack.

However, the youngster, who was initially converted from centreback to forward at the start of the season, would go on to produce one of his most outstanding performance in the colours yet.

With the defence, operating like a well-oiled clockwork in keeping the opponents at bay with telepathic efficiency in reading their intent, while working the ball into attacking positions.

Having led the line with pomp along with Nicholas Ledenmark and ever imposing workhorse, Adi Ravikumar and Basil Al Barr, who carried on the good work of Shiv Tulsiani at rightback, Dionisis Kolokotsas, would add further shine to his day with a goal for the ages.

Taking a freekick just past the centre circle, the veteran defender would send a shot laced with deception into the box, and with the opponents pre-occupied with Cristian Peligros, the flight of the ball cuckolded the keeper to watch it sneak into the back of the net, and it was a prefect plot for the Blacks to get into the break.

Hilderinc FC, having malformed unnecessarily in their last two games with a 2-0 lead going into the second half, were determined not to allow a third misadventure and had themselves planned for the expected onslaught.

Happy to deliberately sit back and break up the play, the Blacks, steered by Sunny Tharidu, who covered every blade of the ground in his role, alongside Kavin Singh, who was the perfect spolier in the middle of the park, looked casual in the face of increased attention.

But within 2 minutes of the restart, Mika Michalowski came close to extending the lead with a shot than fell just past the goal.

As premeditated, the Hilderincs constantly tweaked the personnel to keep the contest lively, but the post came to their aid when the opponents struck it with their only real chance of the game, otherwise, it was a relatively calm day for Gowtham Durai between the stick with another assured presence.

Almost immediately of their woodwork being struck, the Blacks launched into a counterattack and with Diogo Baptista running almost the full length of the pitch, was unfortunate to see his shot drift past the goal.

And the Portuguese midfield was unlucky with his moments later with another attempt that sailed away from the target.

With the Hilderincs working the counter-play with ease, a corner provided a perfect opportunity for them to increase their lead and make the proceeding more comfortable when Cristian Peligros was naively fouled when he when he rose to connect the set-piece.

Despite recent missteps, the duties fell to the forward, but having been deadly from the spot the whole of last season, bar the final game, made it three in three when he blasted the ball high into the stands, prompting calls for a permanent ban from the many penalty-taking aspirants in the team.

Gleeful of the let-up, the Pacifires looked to have pulled a goal back to set up a nervy finish, but it was rightful chalked off for offside, which was also confirmed after video review.

Within 3 minutes the Blacks made sure of all three points when Diogo Baptista was hacked outside the box, and with some personal point to prove to some quarters, Ian Morris stepped up and dispatched the ball past the goalkeeper to claim all three points.

Not done, the Hilderincs came close to adding to the tally in the closing stages, but was satisfied with the win, most importantly with the manner of football they played, and with the campaign heading into the business end with tricky games coming up, it will just be the start of more determination and hard work.