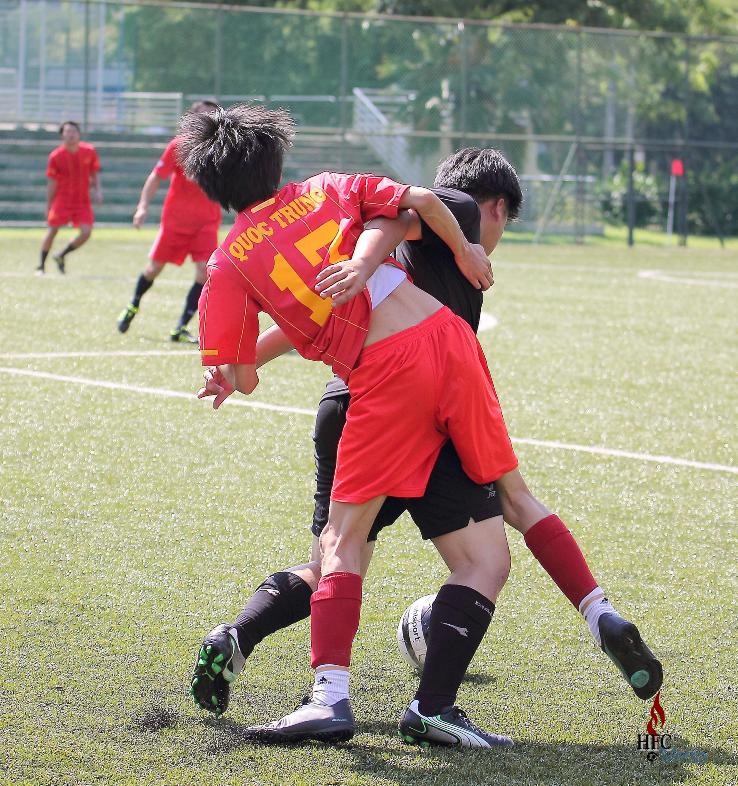 If Hilderinc FC were looking for an adjective to properly express their sentiments after their top of the table clash with Mexican Aces, the word “frustrated” would have fallen vastly short, especially when they had shot themselves in the foot after they had taken a 2 goal advantage and lion’s share of the proceedings right into the second half.

After having battled to a 1-1 draw in the reverse fixture earlier in the season, the sakes were upped in the return game with both sides setting the pace heading into the second half of the campaign, and with only point separating the two before play, the pressure was on both sides to turn up, and true to their standing in the Division 2 table, it was a game reflective of two teams contesting for honours.

Putting on a valiant display with limited resources in the first meeting, the Blacks were in healthy stead, though a couple of no shows meant a revision of a well-thought after plan, and would go on to have a telling effect in the second part of the game.

Despite the adjustments, the Hilderincs were brightly of the blocks and it took just 5 minutes for Nico Olvera to test the goalkeeper, a stand-in, when his shot was turned away when it looked to be heading into the bottom corner.

Just as the Blacks were settling in, they were forced into a change after an injured Mathieu Morand-Duval was withdrawn after just 12 minutes, adding more strain to the already constricted midfield options.

After knocking on the door with Mika Michalowski and Nico Olvera, the Hilderincs took a deserved lead when Mathieu’s replacement, Joh Loh, announced himself within 9 minutes of his entry with a crackerjack shot from distance, finding the top corner with a goal of the season contender, and having spent almost 75% of the time in the opponent’s half, it was a prefect shot in the arm for the men in black.

If the opener was classy, the Blacks’ second was laced with good fortune after the Aces’ keeper was gaffed by Nico Olvera’s shot, with the ball ending in the back net after going through between his legs.

With two goals in 10 minutes, the Hilderincs were in good command of the game, especially with the backline in imperious form, completely dominating everything that the Aces were trying to achieve, notably Glenn Sandhu and Adi Ravikumar, omnipresent to thwart the opponents’ anticipated attacking outlets.

However, apart from the heroic of the Aces keeper to deny no less than two certain goals from Nico Olvera and Cristian Peligros, both with sensational tip-overs, the Blacks were a little too elaborate with their touches, as they when just a quick touch from breaking through on goal to take a considerable lead into the break, though another injury, this time to livewire Sebastian Eraso gave more reasons for concern.

At the restart, despite going inches from extending their lead when Cristian Peligros’ freekick whizzing past the post, the Blacks found themselves with their advantage halved within seconds when the Aces pulled a goal back after they were caught napping, this after repeating warnings at the break to keep up their concertation levels.

Having reduced the deficit, it took the Aces less than a minute to pull level, again, with the Blacks shooting themselves in the foot with their chaotic approach, to utter exasperation having seen a downright contradiction to their earlier domination.

With their lead wiped out inside 5 minutes of the restart, the complexion of the Hilderincs were that of riggity nerves, lacking in any competitive edge, forcing a shaking up, even as it meant throwing in a half-fit Sebastian Eraso, who took to the fight with a groin complain.

But mistakes were still abound and incredibly, after having led 2-0, the Blacks found themselves 2-3 down, and with 20 minutes left on the clock, the Hilderincs need to dig deep to turn the tie around.

Feeling aggrieved at some of the crucial decisions that seem to have gone against them, especially when the goals were concerned, and certain specimens riling them with constant but inane and belligerent interpretations of how football ought to be played, and had hypocritical notion that would indict the Hilderinc Ladies of rough play had their turned up against them, the Blacks were in persistent contest to overcome these challenges, but it was more a test of self-belief than any aggravation.

Pressing hard for the equaliser, the Hilderincs began to lay siege to the Aces’ half, but as with the first game when they defended parity, the opponents built a thick wall between themselves and their goal, but with the several freekicks won, it was the Blacks who were wasteful to make any one of them count, though Aces’ first choice keeper would return to deny them yet again when he pulled off a reflex save when the ball looked to be heading into the top corner.

For all that the Hilderincs did, it was not to be their day, and they will take full blame for their faults which undid them ultimately.

With a good number of games still left to play in the season, this game will not define the Blacks’ campaign, especially the fixtures head into May, but if they do want to keep on track of their objectives, the Hilderincs will have to take stock and avoid more charities.