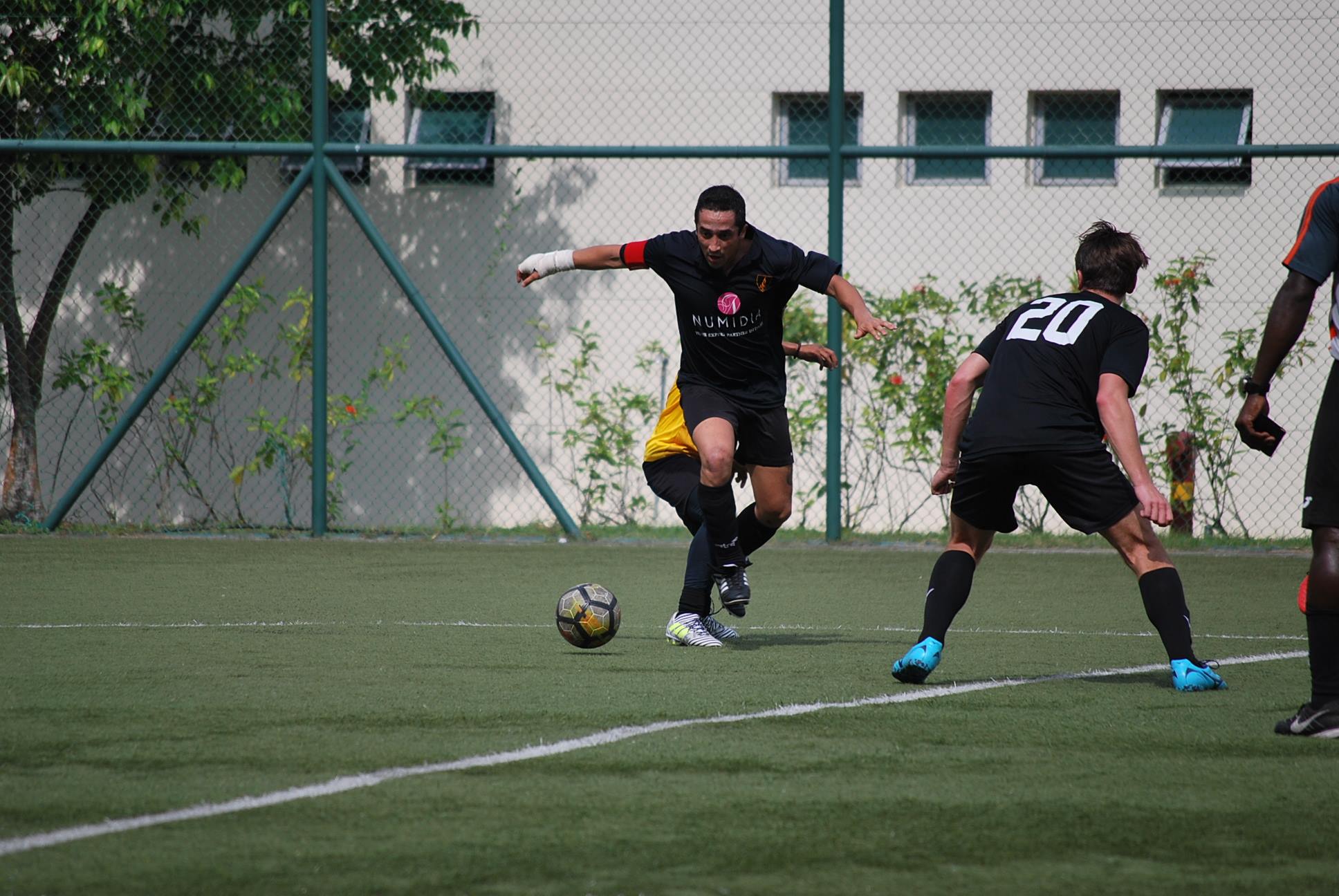 After last week’s postponement, the fixture with Naughty Devils finally was kept, with Hilderinc FC having to dig deep to claim all three points after they secured the tie with a lion-hearted final ten minute display, all after they looked to have lost ground on the current league leaders when they were twice pegged back in the game.

With the Blacks in single-minded focus on the charge for honours, presented themselves with a formidable squad, with several returning in place of the others who were rendered unavailable, underlining the quality in depth with complete alternatives for every position, but were most notably cheered by the return to league action by Cristian Peligros following his re-introduction in last weekend’s friendly game.

In contrast, not much can be said of the opponents who are at the bottom of the table, who turned up way past kickoff time, strolled onto the pitch with eight players, minus a keeper and in assortment of colours, incurring the ire of the referee who twice had to pause the game for players just to don a proper kit.

Perhaps the ramshackle attitude, not befitting a competitive Division 2 side, played into the minds of the Blacks as they started less refined than usual.

Despite the initial attempts to swat pass the two stand-in goalkeepers, the Hilderincs were suspect of smugness as they preferred the elegance over being clinical, though when they did get their usual flow going, it almost produced the opener, with Sebastian Eraso coming close but his shot found the side netting instead.

Though their casualness gave the opponents reason to state their intent, the Blacks’ backline stood resolute, and in spite of attention from the flanks, Adi Ravikumar and Glenn Sandhu, along with Nicholas Ledenmark and Dionisis Kolokotsas limited the Devils to speculative shots from distance, with Gowtham Durai a spectator for most parts, but provided ready response whenever called upon, but it was still more than what the rivals merited.

After much prodding, the Hilderinc took the lead in less than glamourous circumstances, when Cristian Peligros’ freekick following a foul on livewire Sebastian Eraso was despairingly dropped by the player in goal, allowing Nico Olvera to stab the ball in ahead of Dionisis Kolokotsas for the opener in the 19th minute.

With the goal, the Blacks were buoyant and it translated in the way their passed and moved the ball, though they were a tad lower than their usual poise as they took a 1-0 lead into the break.

Even after changes from both sides, normal service resumed with the Hilderincs controlling the game, looking to add to the tally to make matters more comfortable than one would feel with a narrow advantage.

However, with no fault of the players, a chancy decision to alter matters to keep the squad fresh for the final quarter of the game looked to have miscarried when Naughty Devils levelled the score against the run of play ten minutes after the restart.

But within six minutes the Blacks were back in the lead after Varathan Arumugan found Nico Olvera with a delightfully weighted ball for the Spanish ace to dink the onrushing goalkeeper.

Oddly, despite the majority of the play in the opponents’ half, the Hilderincs were pegged back for the second time after a goalkeeper clanger, at the same end of the pitch the Blacks had profited in the first half, leaving them shaken with just 13 minutes remaining on the clock.

Despite looking edgy at a prospect of another unlikely upset on the counter-attack, similar to what they suffered in their last league game, though a draw would in itself leave their plans in shreds, the Blacks made a risk-it-all move with three substitutes thrown into the fray with barely ten minutes left.

With Nico Olvera flicking Moncef Loukili’s drop-ball onto Cristian Peligros, the hitman, who endured an uncharacteristically subdued game, took on four players before smashing in the goal that sent the Blacks into raptures and the Devils in utter despair.

Incredibly, within two minutes, the game was sealed with a typical Peligros strike when he, after receiving the ball from Adi Ravikumar, used his strength to hold off the defender before turning to whip it into the same top corner with much venom from close range to leave no doubt who the winners were.

Sensationally, the forward, in beast-mode, almost made it a hat-trick in four minutes when he run through on Sebastian Eraso’s pass, only to see his shot whizz inches wide past the upright.

Recovering remarkably from the obstacles they had to overcome, the Hilderincs have positioned themselves well for next week’s top of the table clash against Mexican Aces, and though the outcome of that game would not give clear definition to where the title would head to, but it will certainly play a huge part in the larger scheme of things, and after they were held to a 1-1 draw in the earlier fixture with limited resources, the Blacks will be more than stocked for the blockbuster.