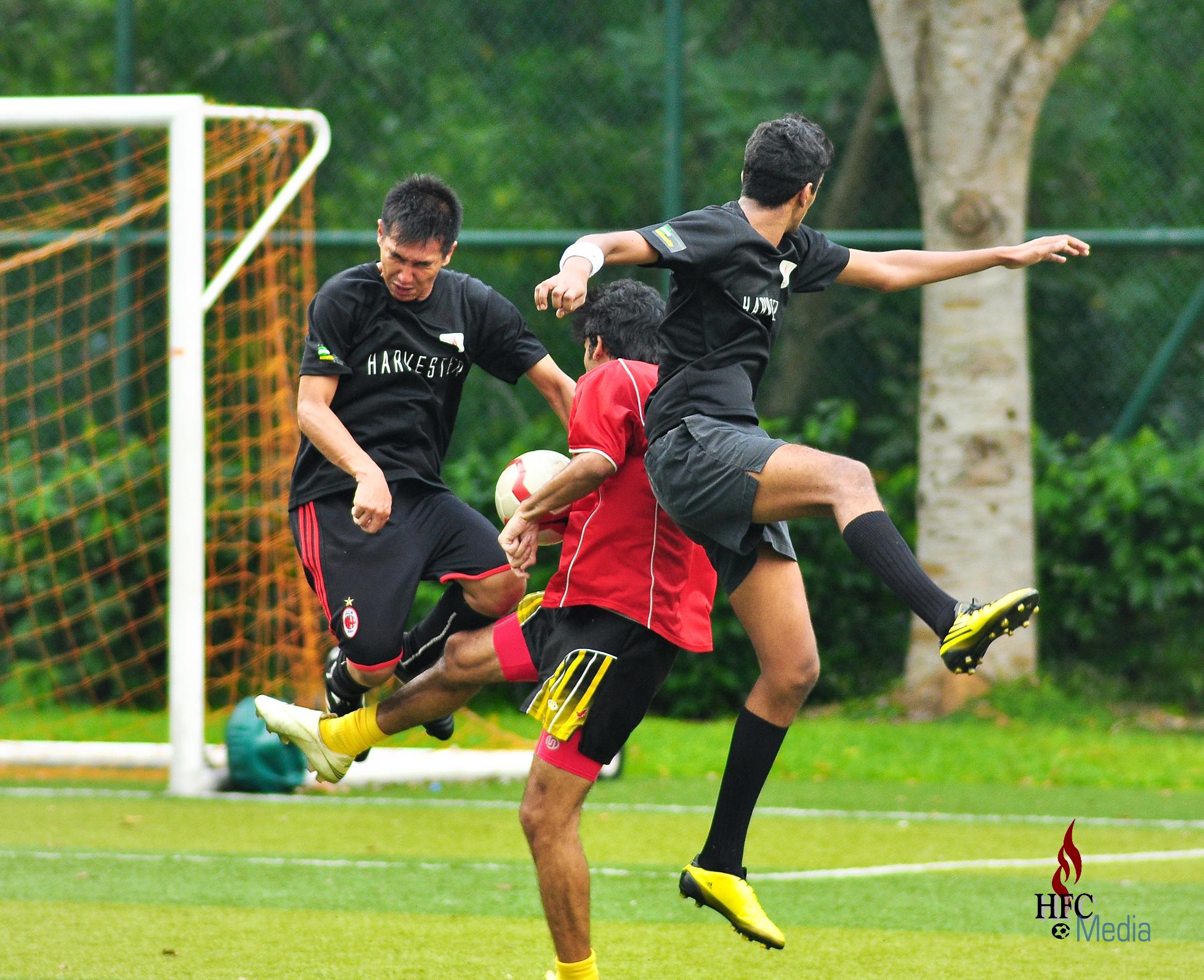 It was an almost prefect homecoming back to the ESPZEN Saturday League Division 2 for Hilderinc Football Club after two seasons away, if it was not for the curious case of outré officiating as they were held 2-2 by TGA Strollers FC in an absorbing encounter.

The Blacks re-acquaintance to the second tier was handed a tricky script even before they took to the pitch, but intense wheeling and dealing allowed them to return to their previous “adopted homeground” at Merlion Sports City, instead of an inferior setting, not fitting a competitive league fixture.

For all the meticulous planning to ensure a constructive start to their campaign, the Blacks were forced to kickoff with an improvised side in certain departments when the intended lineup failed to materialise due to tardiness.

Consequentially, the Lemony Snicket, A Series of Unfortunate Events theme to the proceedings meant that it was an uncomfortable opening seconds as the Blacks tried to work out their patchwork.

Yet, the first serious opportunity would fall for the Hilderincs when they launched a quick counterattack after Mika Michalowski tested the goalkeeper on the day of his promotion to lead the frontline.

Keeping the pressure from the resultant corner, the Blacks took the lead inside 3mins when Nicholas Ledenmark’s freekick from the middle of park was inadvertently headed into the back of his own net by the TGA defender after he was placed under pressure by Kaisa Miettinen, who would have gotten to the ball had he left it.

It was the second time in as many weeks that the Hilderinc lass was directly involved in a Blacks’ goal with her smart movement, forcing a mistake from the opponents as a result.

However, as good as the lead was, the makeshift setup allowed TGA a lot more space and time than what the Blacks would normally allot, as they looked hurried and misdirected at times, atypical of their usual poise.

It provided a serious case for displeasure, especially when they were pegged back when Strollers equalised against the run of play with an opportunistic attempt that fell into the back of the net in the 14th minute.

With the mid-point water break offering time from a quick reflection, the Hilderincs rung in the changes with the introduction of Nabil Zahrif and Varanthan Arumugan.

Inside two minutes of his competitive bow for the Blacks, Varanthan added his name to the scoresheet when he made the most of a miscalculation of a long ball punt forward to coolly lift it over the goalkeeper to restore the Hilderincs’ lead, paying immediate dividends to the substitution.

Having regained their lead, the Blacks looked good with their advantage for 10mins until the referee, who had in equal measure, caused the ire of both sides, awarded a contentious penalty against Sunny Tharidu, allowing the Strollers draw level for the second time in the game, leaving the Hilderincs aggrieved at the lack of logic in that call.

With the game taking an overly combative nature at times, the sides battled it out as they went into the break level on two goals apiece.

The second half started with both teams taking a more direct route as the game swung from end to end, though more backline were up for the task at hand.

However, as the minutes ticked, the Hilderincs started to crank up the ante with their high pressing football, giving the Strollers limited time on the ball.

The Blacks came mighty close to taking the lead at the half way mark of the second period when Aamir Fikri bravely set up Jon Loh in the box, but the midfielder’s sweetly stuck volley would cannon off the crossbar with the keeper well beaten.

Finding the ascendency the Hilderincs started to encamp in the Strollers half for extended periods, collectively pushing hard for the winner at every attack.

Coming close yet again when the Strollers keeper only managed to parry away Varanthan Arumurgan’s belter to Ian Morris, but the skipper’s choice to go for placing rather than power allowed the shot-stopper to keep the ball out with the tip of his toes.

With games going into the final stretch, Jon Loh would come inches from applying the final touch to send the ball into an empty net after he and Mika Michalowski drew the keeper out of position.

For all the Hilderincs’ endeavours, the final mention was duly won by the man in the middle who failed to see the most blatant and obvious handball inside the box as the Blacks, by this time felt that they were robbed by the official.

While the result in a cracking game of football between two resolute teams would have been a good outcome, the Hilderincs would feel a little unfortunate to not come out with all three points, considering their display, especially in the second half.

On a positive note and reason to be more upbeat for the rest of the season, the Blacks will feel confident of a good campaign with gritty performances like this.