Blacks Return With A Rout 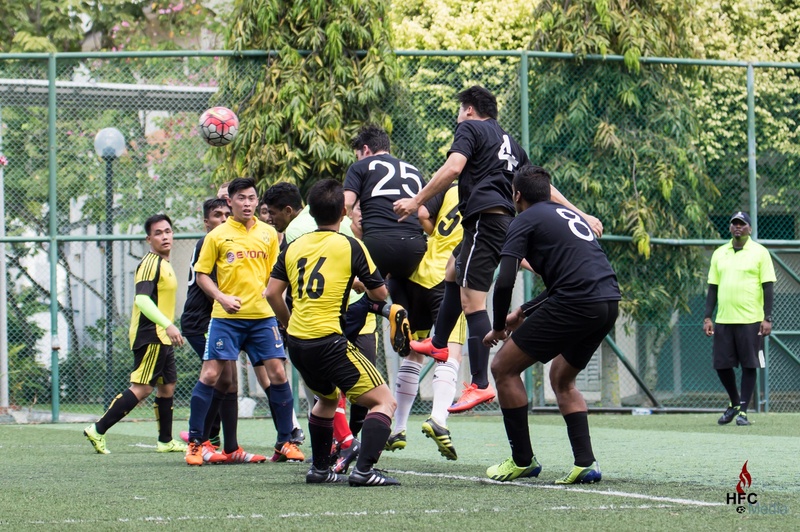 It was a charming resumption of action after almost a month of rest by Hilderinc Football Club, who got their pre-season preparation going with a comprehensive win over Bang Brothers FC, scoring one less a dozen.

Having last met in June 2012, the Blacks, then on a run of a club record of seven successive wins before their 3-2 defeat against the Brothers, established that match fitness was the most vital objective, as they gear up for the ESPZEN Sunday League 24 season, due to kick off in the opening Sunday of March.

No less than three withdrawals just hours prior to kick-off and two the day before due to unavoidable circumstances would render a rethink of the earnestly laid up matchday plans; to an extend of forcing Sunny Tharidu between the sticks, with all four goalkeepers on the HFC books were unavailable.

The late inclusion of Jonathon Mok would reprieve the Blacks of more discomfort, as they lined up in somewhat unfamiliar makeup.

Alongside a makeshift keeper, Benoit Herbaut was paired with Kavin Singh, minutes after meeting each other for the first time, while flanked Sai Ganesh and debutant Adib Alias, completing a virgin backline, as Bayu Tanmizi and Jonathon Mok completed the theme of first acquaintances, joining up in the heart of midfield.

Playing for the first time on grass in unrecallable number of years, the Blacks, patchy and tentative in the opening minutes, took a little longer to settle down against an opponent, who were looking equally uncomfortable with the unpredictable surface.

For all the awkwardness and early scratchy prodding, Jonathon Mok settled the nerves with a finely taken goal from distance inside four minutes, putting the Hilderincs on the front foot.

It took the Blacks another four minutes to extend their lead after Sai Ganesh picked up the run of Mitchell Keh in a quick counterattack.

The forward, who had already been a constant irritant to the Brothers, sent in a delightful pinpoint cross to Sashikumar Mahathevan to pick his spot with a well taken header.

Further opportunities would fall to the former but would come close without finding the back of the net, but gained full marks for his positional play.

However, a miscommunication induced mix up allowed Bang Brothers FC to pull a goal back against the run of play, though any fault can be absorbed, considering the improvised circumstances.

It was the best the Brothers got out of the Hilderincs in the first half as the Blacks quickly supressed any thoughts of a way back into the game with their measured response.

Young fullback Adib Alias, was denied a dream debut when his goal bound header from a corner was cleared off the line, while influential Jonathon Mok clipped the crossbar with another long range attempted.

There was no denying the midfielder of his prominent display as he weaved pass the horde of defenders before setting up Sashikumar Mahathevan for a simple tap in, to restore the Blacks’ two goal advantage before the break.

The Hilderincs brought on Azman Azmi, Basil Al Barr and Alex Wong for the restart, joining Parthiban Aruchamy and Victor Gutierrez, who was playing his first game for the Blacks, having entered the fray midway through in the first half.

The intent was clear from the get go, as the Hilderincs forced the game deep into the Brothers’ half, using their experience to good effect.

A quick break resulted in the Blacks netting a fourth as Jonathon Mok sealed his brace with another of his trademark finishes from distance, catching the Brothers’ keeper unaware.

The Hilderincs were in full flow with their pass and move football, threating to score from every attack, and it was another comprehensive move which handed them their fifth after Parthiban Aruchamy’s sweeping ball was stroked in by Mitchell Keh.

The livewire was at it again for his second goal of the game, finishing off a six pass move, which started from the Blacks’ own half, and from left to right.

By this time, it was evident that the Brothers were finding it hard to deal with the well drilled involvement of the Blacks, who were running on full throttle against a less apt opponent.

Pressing high against a tiring Brothers side, the Hilderincs past the half a dozen mark after Victor Gutierrez forced a mistake in the middle of the park for Ian Morris to profit with a deft touch past a stranded keeper.

It was eight goals within a minute from the restart as Sashikumar Mahathevan scored his unique hat-trick of tap-ins, after leftback, Basil Al Barr worked excellently to turned provider for the big striker.

Debutant Adib Alias, managed to get his dream bow when he bundled in his goal after a determined run from the heart of midfield as the Brothers lost all resistance.

A goal a minute at this point, Mitchell Keh sealed his hat-trick with the easiest of finishes after a lazy play back left the forward with no choice but to score, as it was turning into quite a challenge just to keep count of the scoreline as it went into double digits.

Credit to Bang Brothers FC, though they were outclass, did manage to get another goal after the Blacks were caught on the counter.

And while Sunny Tharidu was excellent in goal with his quick reading of the game and fine saves, he was unable to see a header glide past him, though it was no more than a consolation for the Brothers.

Insatiable, the Hilderincs refused to let down on their intensity, as they were determine to totally annihilate their opponents, perhaps a venting of stored up “agitation” from last season’s annoying shortcoming, which the Brothers were unfortunate to be at the receiving end.

The final salvo was reserved for Parthiban Aruchamy, who responded quickest to Alex Wong’s header bouncing off the crossbar from a corner, as he bundled the ball into the net to complete the trashing.

While the scoreline against an insubstantial opponent would have somewhat flattered the Hilderincs, the manner in which the Blacks went about the business, especially even with several missing, was a positive on which they will unquestionably build on for the coming campaign where it was not be a stroll in the park.

Levelheadedly, the Hilderincs prepare for their next friendly, though they may not receive equal handouts like they did against Bang Brothers FC.