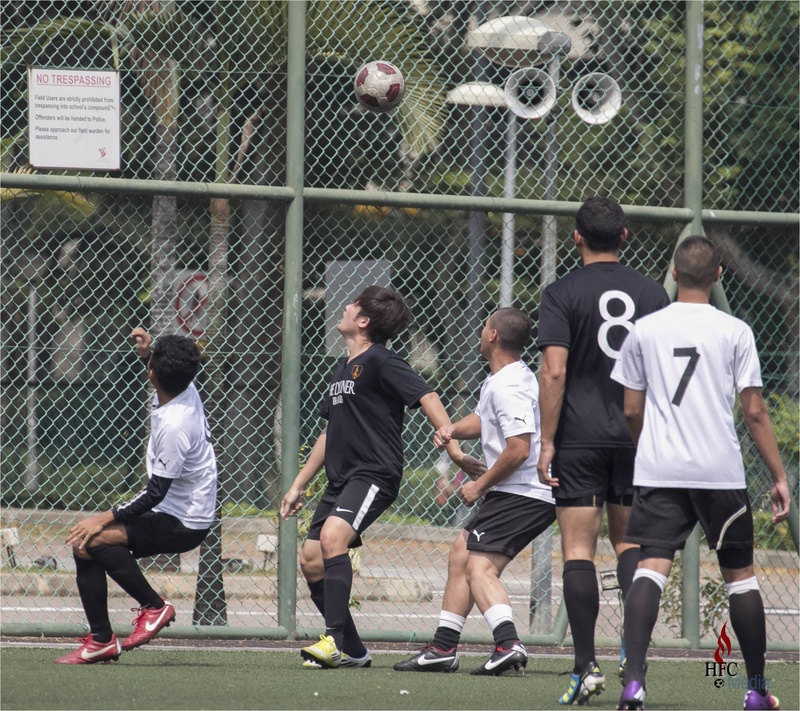 Hilderinc FC’s seven match winning run and ascend up the league table in the ESPZEN Sunday League 23 Division 4 come to an abrupt and mystifying end, in the most curious manner, against the Blacks’ now confirmed bona fide bogey team, Vincitore FC.

If the events of the opening day encounter between these two sides provided a topic of discussion on the Blacks’ ignominy, the return fixture added another chapter on how they were denied a positive result, which would be worthy of a Lemony Snicket twist.

A combination of the woodwork denying certain goals, no less than five time in the course of the game, an inspired Vincitore keeper, two charitable and utterly preventable goals, an unfortunate own goal, a couple more due to defensive naivety and an uncertain referee, all played their part in a truly bizarre afternoon.

If the events of the day were scripted by the football gods, the Blacks’ were unware of it as they wasted little time in wanting to make right the result of their opening day defeat by taking the lead within four minutes through a Gabir Nabil freekick, which gave the Vincitore stand in keeper little chance to react to.

Even after the introduction of the opponents’ keeper, the Blacks were on the front foot throughout the game, pinning the Vincitores in their own half for long periods.

While drawing unforced errors, the Hilderincs were slack in punishing the Vincitores with the opportunities they had.

The first indication that it was going to be a dubious day was when Nicolas Amstutz’s smart near post header from a corner struck the upright with the Vincitore players grasping at thin air, but the Blacks could have been forgiven to think that they will get it right the next time around.

The introduction of Mitchell Keh midway through the half gave the Blacks added stimulus, but the Vincitore keeper, on a personal mission to stop the nippy forward, denied him with a hat trick of saves.

Yet, when he was finally beaten, the crossbar came to his aid after he tipped Mitchell’s blistering shot onto it.

Gabir Nabil was next to confront the colluding goalpost when he beat the keeper after floating pass the defence but, yet again the ball hit the inside of the post and rolled across the face of the goal, to the disbelief of everyone, including the Vincitores.

Despite after hitting the woodwork on three occasion and being kept out by the opposing keeper for as many times, without prejudice, there was very little to suggest that the Blacks were in nothing by in complete control of the game going into the 40th minute mark.

However, it was time for the referee to play his hand, when contrary to the ESPZEN League regulation concerning match duration, which was to be “played 40 minutes per half”, he continued the proceedings into the 45th minute, a decision that turned the outcome of the game, amongst several other odd calls.

Astonishingly, in a matter of five minutes, the Hilderincs handed the game to the Vincitores with two of the most incredible self-inflicting errors, for which they were gravely punished by their opponents, who were not going to decline charity.

Having lead, albeit with a single goal, but in complete dominance for 40 minutes of the half, the Blacks, shocked, went into the break 2-1 down.

There was no second guessing the Hilderincs’ intent for the second period, as they came off the blocks to get back into the game.

As it was in the first half, the Blacks poured forward to get the equaliser, and they duly were rewarded within five minutes when Gabir Nabil was yet again at his best to calmly finish off a fine move, started by Sunny Tharidu from his own half, a carbon copy of Vincitores’ earlier leveller.

With chests forward, the Hilderincs sensed a turn in the tide as they besieged the Vincitores in the own half, going for the kill.

Living on the edge, the Vincitores were forced to concede a freekick in a dangerous position outside the box, and as Serhat Dalbeyler presided over the deadball, the Blacks’ optimism was at its peak.

For the fourth time in the game, with the keeper well beaten by Serhat’s freekick, the ball cannoned off the goalpost, this time hitting the angle of the post and the crossbar before going out for safety.

Though frustrated, the Hilderincs maintained their poise in keeping their attacking momentum, though they were stretched at times by the counter attacking Vincitores.

However, a miss from three yards out proved costly for the Blacks who within minutes found themselves a goal down again, much against the run of play after a hopefully ball into the box was put through the wrong net for a luckless own goal, unbelievably the third in the two games against Vincitore FC this season alone, reaffirming the bogey team notion.

The Vincitore FC would go on to add two more opportunistic goals, again profiting and punishing the Hilderincs’ defensive shortcomings on the day.

Nothing could have said more about the desertion of lady luck from the Hilderinc camp when Gabir Nabil, who could have easily had a hat-trick was denied by the woodwork individually for the second time in the game and in total five times collectively as a team.

This damaging defeat comes at the time when the Hilderincs face their toughest rivals in successive fixtures, and a quick response would be needed for the Blacks to recover and recapture the initiative again.