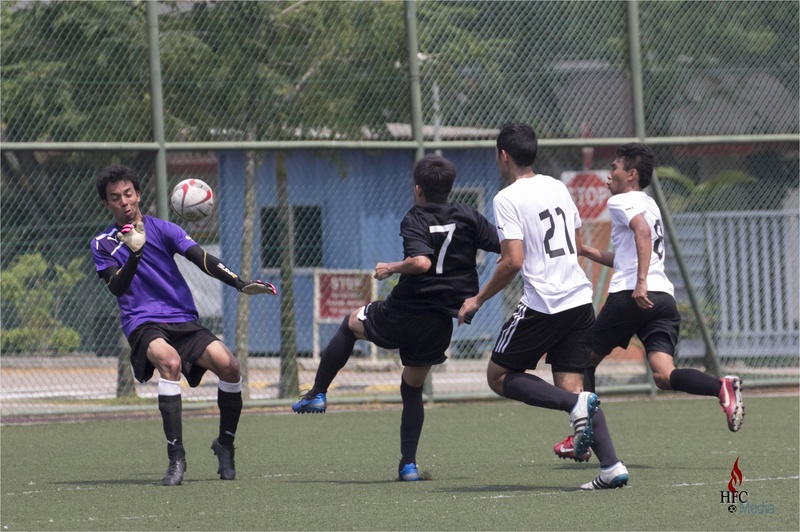 Having a weekend free from league duties, Hilderinc FC took the opportunity to keep their match fitness sharp with a friendly against Faith FC at Anglo-Chinese Junior College, more importantly, as a build up to their clash against Singapore Panthers FC next Sunday.

Contrary to the numbers seven days ago, when the HFC suffered their worst ever defeat in ESPZEN, the Blacks had a healthy squad to draw from, some taking the rare occasion of playing the 5pm kickoff.

With Parthiban Aruchamy progressing slowly since his return to action after his ACL surgery, the Blacks welcomed Jonathon Mok, who was playing his first game of the new season after being restricted due to personal commitments, and the Hilderincs named fifteen year old, Harry Shaw in the starting lineup.

Eight months of playing at a smaller HYFA pitch meant that the Blacks took a while before acquainting themselves to the full length of the ACJC ground, finding their footing with each successful pass completion.

Significantly, it was a return to their celebrated pass and move football, which had been missing since the end of last season when they were a delight as they finished second in Division five of the ESPZEN Sunday League 22, a mere two points from the top.

Bossing the play with almost 85% of possession, the Blacks were in complete control of the game as they covered the full surface area of the pitch, defending from the frontline and initiating the attacks from the back, with the midfield trio of Rama Witjaksono, Bayu Tanmizi and youngster, Harry Shaw, who was a delight beyond his tender age, pulling the strings peerlessly.

While not lacking in goal bound opportunities from Ian Morris, David Zheng, Logaraj Sundram, Bayu Tanmizi and Harry Shaw, the game remained goalless going into the break, though the Blacks could have done a little more to break the impasse.

The second half saw the inclusion of big guns, Sashikumar Mahathevan, Jeevan, Jonathon Mok, Vijay Ramadoss, along with teenager Basil Al Barr and Parthiban Aruchamy, as the Hilderincs looked to add goals to their dominance.

It look a mere five minutes for the changes to take good effect when Sashikumar’s brute force won him the ball in midfield before threading a pinpoint pass to Ian Morris, whose deft touch across goal put the Blacks deservedly ahead.

Having breached Faith FC’s defensive resolve, the Hilderincs were in buoyant mood, as they went in search of more cheer, and Parthiban Aruchamy could have made it an inspirational return from his long term injury when he found himself in an excellent positon receiving the ball behind backline from a Jonathon Mok cross, but having taken the ball down delightfully, scuffed his shot over the crossbar to the astonishment of the crowd, who would have loved to see the defender score.

However, keeping up with his more than impressive debut, Harry Shaw, who become the youngest ever player in Hilderinc FC’s history at fifteen years old, beating the longstanding record of Cyrill Binder, who turned up for the Blacks at sixteen, capped his performance with an assists of the highest order, finding Rama Witjaksono with a well flighted cross, which the experienced midfielder tucker away with ease for his first ever goal for the Hilderincs.

The third was added midway through when Jonathon Mok’s corner was headed in by Sashikumar, who was rewarded for his constant nuisance in and around the Faith FC goal.

A fourth was only inches off when another charming Jonathon Mok cross was headed into the path of Jeevan by Sashikumar, but the Club President’s brave driving header creeped past the woodwork, for what would have been otherwise a well worked team goal and classic finish.

Though no further goals were added to the tally, the Hilderincs gave every player a productive outing, including General Manager, Simon Khaw, who took his place between the sticks, doing well in his sweeper/ keeper role.

Although the opponent on the day provided decent opposition, the Hilderincs will be fully aware that they will have to up a couple of notches when the take on the Panthers, who themselves have had an inconsistent start to the season.

With all three points extremely vital for both teams, a close and keenly fought contest is expected.