Hilderincs The Better Team By A Hair 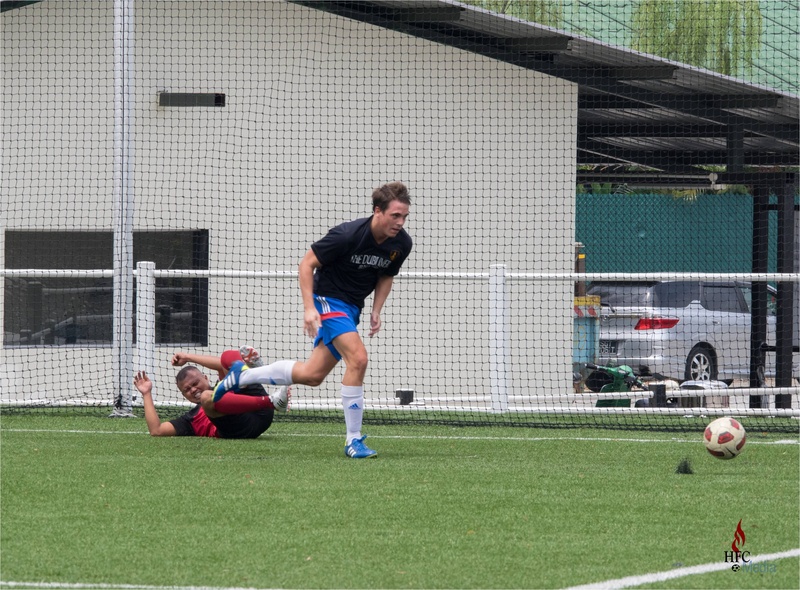 Hilderinc FC registered their long overdue first win of the infant ESPZEN Sunday League 23 season, at the fourth time asking, when they overcame, The Better Team FC, in a self-inflicted and needless thriller.

After their bizarre opening to the new campaign, the Blacks were keen to restore normality against the youthful league debutants, who have proven to be a considerable contest amongst the Division 4 teams.

The return of the Black’s British Contingent of Jonathon Hill, Nick O’Sullivan and David Finch, along with Mohammad Hissham proved vital, especially with the unavailability of several others, but was also a testament to the depth of the squad.

The Hilderincs’ appetite for the much yearned three points was evident right from kick off when they could have opened the account in the first minute when Ian Morris’ deft flicked header in front of goal was kept away by the TBT FC keeper.

Besieging the opponent’s half, the Blacks were in full throttle as they came close with attempts from the front trio of Gabir Nabil, Ian Morris and David Finch.

And it was the latter who would open the floodgates when playing a neat one two with Jonny Hill, ended the move with a finely taken goal to put the Hilderincs in the lead.

It was within minutes that the Blacks extended their lead, and like the first goal, which had a defender’s assist, the second saw Sunny Tharidu’s long range effort intelligently swept into the net by David Finch, for his brace.

While the affairs looked comfortable for HFC, a moment of utter novitiate allowed TBT to pull a goal back against the run of play.

Keeper Leon Lee was pivotal in ensuring that the opponents did not get more than they deserved when he pulled off a fine acrobatic save to deny a freekick from finding the net.

However, the Blacks restored their two goal advantage before the break when Jonny Hill smashed in a typical belter after a corner was caught by in a pinball melee, cementing the Hilderincs dominance.

The second half saw the debuts of nineteen year old Basil Al Barr and twenty three year old Bayu Tanmizi, while a well-rested Philip Vahn and Logaraj Sundram were added to the fecund crew, with the latter two making an immediate impact upon taking to the field.

A long freekick from Sunny Tharidu, just outside his own penalty box, was exquisitely flicked on by Philip Vahn in the middle of the park to Logaraj, who in his usual poise, rounded the defence before calmly finishing off the three point attack.

In less than two minutes, it was five when Man of the Match, Jonny Hill, was involved again, this time with a long throw in, which was haplessly bundled over the line by the TBT goalkeeper.

While David Finch and Logaraj Sundram, amongst others threaten to add to their tally, the next fifteen minutes were defined by one of the most mystifying display from the Blacks.

While Leon Lee was impregnable and peerless in goal, a phase of uncharacteristic nerve and misjudgement saw the keeper make two critical errors in quick succession, bringing TBT FC back into the game, but to the young keeper’s defence, he pulled off a couple of outstandingly brave saves to protect the Hilderincs’ lead.

However a soft penalty harshly awarded against Sunny Tharidu for handball threaten to derail the Hilderincs’ day as TBT FC reduced their lead to only one goal, done so with much annoying infantile hilarity.

To stop the rot and regain control, drastic measures were taken as changes to the personnel were rung.

Recuperating from the jolt, the Hilderincs encamped the TBT FC half, restricting any foray into their own portion of the pitch, with highly impressive displays from Basil Al Barr and Bayu Tanmizi adding strength to the cause.

Ian Morris’ freekick smacking the crossbar was to be the final meaningful act of the day as the Hilderincs held on to secure all three points and move out the foot of the table.

With equally patchy early starts from a couple other favourites, the Hilderincs can be confident that with a consistent display hereon, though not pretty always, can see them pick up the challenge again in a tough Division, but not till after the face Division One side, Purple Monkeys FC, in the ESPZEN FA Cup next weekend.