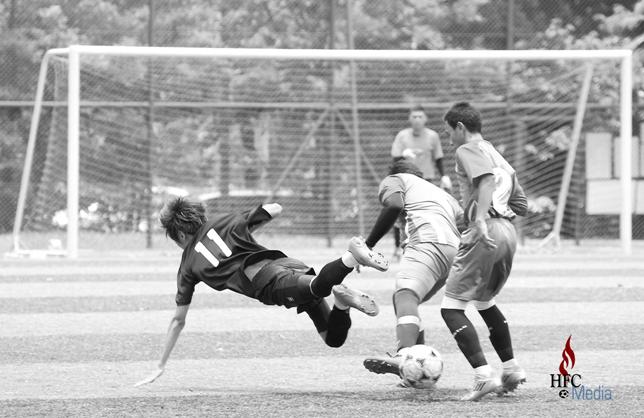 The Blacks’ continued their listless approach to the start of the new ESPZEN Sunday League season when they endured a perplexing defeat at the hands of their seasonal rivals, Predators FC, on an afternoon of reflective emotions.

On the back of having received one demerit league point, along with a 3-0 defeat declared for their opening day incident, the Blacks would have wished for better luck going into a match, which has always seen combative but fair battles in the past, but were again at the wrong end of the scoreline in a match where inches decided the final outcome.

Apart from welcoming Shadiq Al Hussain back, who made his loan return in the Hilderinc colours, the Blacks were reorganised in defence due to the suspension of Nicholas Ledenmark,

With Leslie Eng starting for the first time in nearly a year, Denis Lobov and a half fit Azman Azmi manned the centre, with Alex Wong at the usual leftback reigns.

David Zheng returning to his welcome midfield duties were complimented by Rama Witjaksono and Shadiq, as Gabir Nabil, Sashikumar Mahathevan and Ian Morris spearheaded the attacked, though the latter was replaced early in the game by Logaraj Sundram after sustaining a foot injury.

True to their usual poise, both sides did not disappoint with their intentions, going for each other’s goal from the start, probing for a way behind the defences, having fair share of chances to take the lead, with both, collectively striking the woodwork on several occasions in a chess game of sorts.

Gopal Peethambaran was again at the heart of the action when he produced a series of breath-taking saves, including one from the penalty spot to maintain parity.

The Hilderincs had their moment to steal the lead when Denis Lobov came within a whisker with a lovely long range strike, only to see his attempt cast a shadow on the crossbar, while Gabir Nabil and Sashikumar came close to finding the back of the net.

And with neither team giving a shuffle, the first period was brought to an end, lacking only in goals but not in the chances or action in the difficult conditions.

There was an increased vigour in the Blacks play in the restart but one moment could have change landscape of the game.

Playing off an intelligent build up, Logaraj Sundram and everyone on the ground were convinced that he had scored when he made the most of goal bound attempt, with the Predators well beaten.

However, as script of the day had it, the woodwork would determine the outcome of the game, keeping the ball out with millimetres to spare.

Within minutes of the near miss, Predators FC, with their chances of their own were finally rewarded for their persistence, when a sequence of inattention by the Blacks saw them fall four goals behind, somewhat needlessly and cruelly.

Further chances for Jeevan, Gabir Nabil and Shadiq Al Hussain, amongst others were inches wide of the post and crossbar with their certain efforts, leading to question if this was going to be their day, though Gopal Peethambaran was at his heroic best to keep the damage contained with his fine saves.

However, the loss of life of a fellow Sunday League football player before their game, brought a sense of retrospect for Hilderinc FC, knowing that they had just a lost a game, which paled in comparison to the unfortunate passing.

Deeply sadden by the earlier incident and having suffered back to back defeat in the league and finding themselves at the foot of the Division 4 table, the Hilderincs look to return to winning ways once they resume two weeks from now.