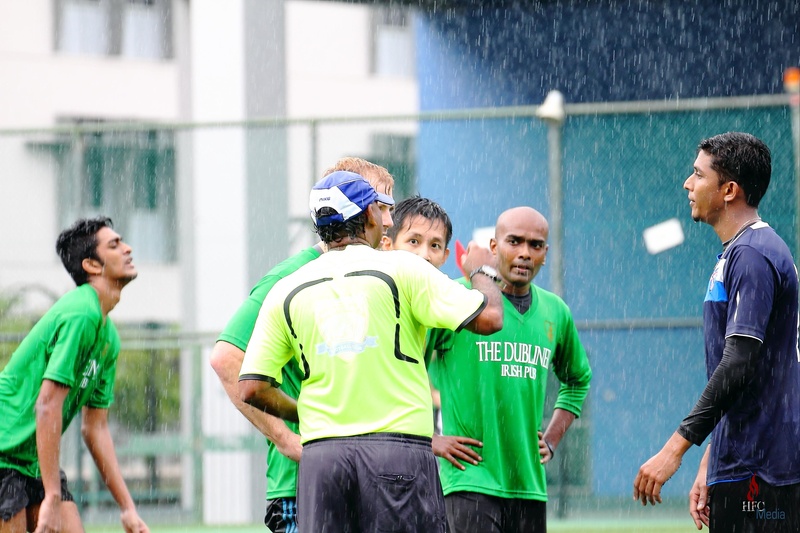 For the second pre-season friendly in a row, not taking into the account last weekend’s charity match, the Blacks were left deeply frustrated with the lack of numbers within their ranks, when they squared off against Singapore Pirates FC.

Whist the Blacks got off with a creditable result against fellow ESPZEN club, Uncaged Elephants FC two weeks ago, the same could not be said against the Equatorial Football League side, as the Hilderincs, though outstanding in first half, faded modestly in the second.

With mass un-availabilities, an alarming trend for pre-season friendlies, late withdrawals and highly infuriating no-shows, left the Blacks impoverished, only saved from an even more penurious state by Gabir Nabil, who despite fasting, made himself present in the unforgiving weather, and the eleventh hour inclusion of Parthiban Aruchamy, who is still in the early stages of rehabilitation since his ACL surgery.

The Hilderincs’ lack teetered on desperation so much so that, skipper Ian Morris was an enforced leftback, while top striker, Logaraj Sundram, played much deeper in midfield.

However, true to the famed grit of the Hilderincs, the Blacks produced an imperious swashbuckling display against the Pirates in the first half, denying their opponents any rhythm on all quarters of the pitch.

Led by Sunny Tharidu and Ted Kaneda, the patched up defence stood firm against the Pirates’ attacks, resisting with well-coordinated and communicated intend, with keeper Lim Yong Kiat’s alertness a key factor, guiding from the hindmost.

With Rama Witjaksono and Philip Vahn breaking up the play in the midfield and springing the attack in tandem with Logaraj Sundram, the Blacks could have scored with each their three forwards netting at least a goal apiece, but delayed action in seizing the opportunities, craved out by pure tenacity, would hurt the Hilderincs at the end of the day.

Frustrated and dis-jointed, the Pirates were the happier to hear the half time whistle as both teams sought solace for the heat, going goalless into the break.

Drained by the brave exploits of the first period and lacking options to refresh the team, the Blacks found themselves in the backfoot, right from the restart.

With the Pirates going for the jugular from the onset, the Blacks let their concentration down and were punished with two quick but preventable goals, much to their exhausted disbelieve.

The Blacks, however, refused to lay down but responded in typical Hilderinc swagger when Mitchell Keh pulled a goal back in an aplomb fashion, finding the net on the run and from a difficult angle.

That was as good as it got for the Hilderincs, who further scraped the bottom of their barrel and reorganised an already makeshift defence, when Sunny Tharidu extracted from the game for a prearranged appointment, despite his best efforts to stretch his playing time.

Two further goals compounded the Blacks to their third pre-season defeat in as many games, but knowing that they had every chance of getting more than what they actually got, if not for the detrimental numbers, certainly left a bitterly annoying taste on those present.

With the new ESPZEN Sunday League kicking off next week, the Hilderincs will hope that the numeric disappearing acts will be a thing of the past and will not show itself again, as their Blacks face a tough Division this season.