All Stars Serve Up Masterclass Display In Anniversary Win 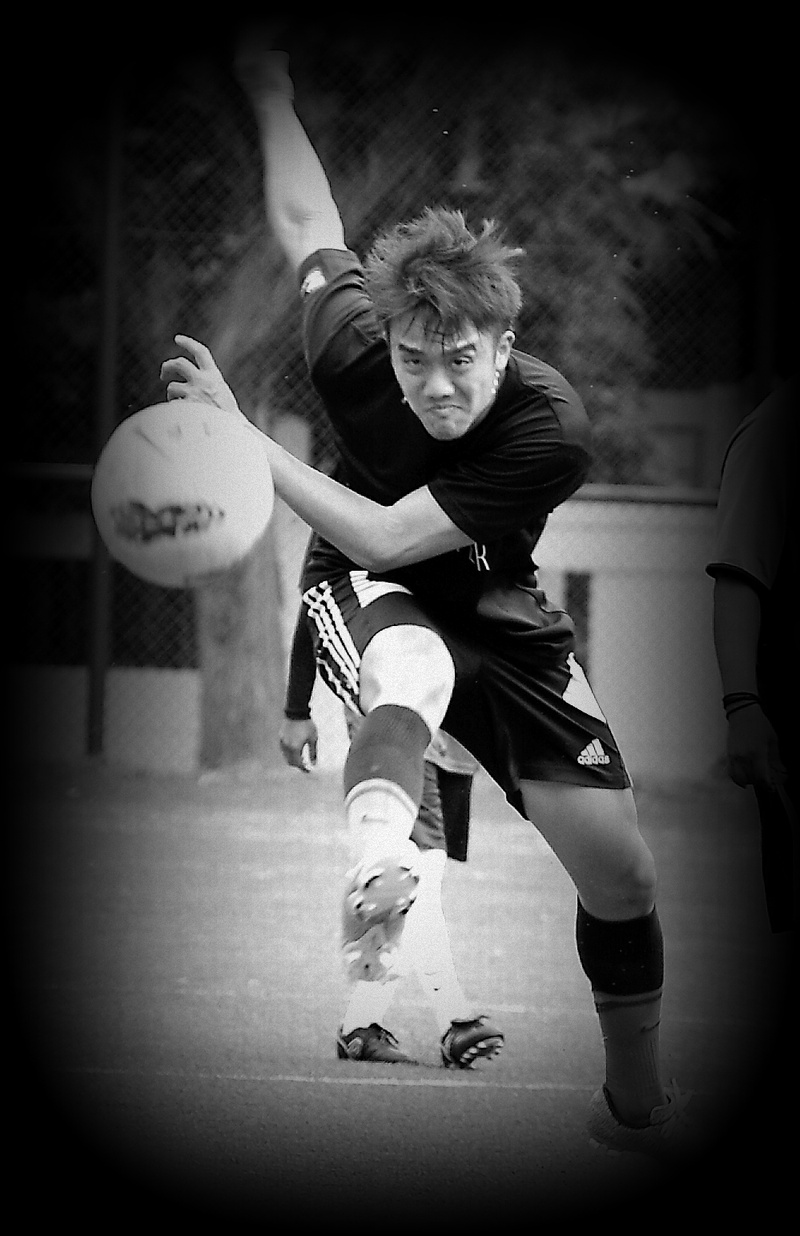 The former Blacks claimed the bragging rights in the clash of the past and the present, when HFC All Stars beat Hilderinc FC 4-1 in their first ever Anniversary Charity match at HYFA last night.

The coming together of the Old Guards, who laid the foundation of the Club, and the current Hilderinc side, who had almost claimed their first league title in their history, was a perfect setting to celebrate the 15th year milestone.

The match, played in support of the Singapore Children’s Society, was an opportunity for Hilderinc Football Club to look beyond their walls and take the first step in giving back to community, realising a dream that was started when the Club formed in June 2000, while celebrating a very special anniversary.

The star-studded All Stars were presented by players from the very first HFC side, then known as Harvester FC, the second great team who spend almost a decade growing up together with the team and those who were the pillars when the Club made the bold transition into the ESPZEN Sunday League.

Looking to prove that the current squad, with their recent historic achievement, were legends in their own right, Hilderinc FC were set for an epic encounter.

However, their well thought plans were disrupted when no less than three forwards had to withdraw due to various reasons, leaving the Blacks short on much needed firepower, resulting in an improvised frontline of Ian Morris, new additions, Andy Chang and Lim Rong Shan, the latter a defensive midfielder.

The return of Frenchman, Elric Das, to partner Rama Witjaksono and Jeevan in the heart of midfield provided the steel and creativity, while Alex Wong, David Zheng, Sunny Tharidu and skipper for the day, Nicholas Ledenmark formed the rampart in front of keeper Leon Lee.

If there were any pre-match celebratory mood, it was quickly put on hold, as in true past and present HFC fashion, both teams were in full throttle, out to prove their cohort was superior.

Managed by Jeffery “Beckham” Tay, the All Stars, playing in green, were in complete focus, turning back the clock as they showed off their footwork, while not missing a beat, despite not having played together for a long while.

One of HFC’s best midfielder of all time, Ronald Chai, leading by the captain’s example, was in delightful form, as he worked the midfield with another maestro, Andrew Bai.

Playing the famed 4-4-2 formation of old, defenders, Daniel Chin, Leslie Eng, Azman Azmi and Lee Woon Lai, were a bedrock as Leong Chi Chao and Cyrill Binder ran the flanks in support of Jason Lu and Sashikumar Mahathevan, who along with Leslie, Azman and Gopal Peethambaran in goal, were current Hilderinc FC players and committee members, but turned up alongside their former teammates for this game.

Perhaps underestimating the All Stars’ objectives, the Blacks, who had charity and friendly at the back of their minds, were caught off guard by the former players’ intensity, finding themselves outplayed in the opening minutes of the game.

While the All Stars dominated the early exchanges, the Blacks were called into astute defensive response as they collectively held the former players at bay.

In the grand scheme of things, it was fitting then that the first goal of the game would come from the man who started it all.

After a good interplay with Andy Chang, Club President, Jeevan released a delightful through ball to Ian Morris, who stabbed in the ball on the rebound after cheekily trying to nutmeg Gopal Peethambaran.

While the All Stars, especially those on the bench, were obstinate that the veteran was clearly offside and his goal should not have stood, video replays showed that Leslie Eng had indeed played him onside when the ball was played, and so the referee was justified with his able call.

The early goal allowed the Blacks to calm themselves down and participate proper in the game.

While much of the exchanges were confined to the middle of the park, occasional threats by the All Stars were duly repelled by the Blacks, who being light upfront, made little head way to threaten another goal.

It took almost ten minutes for the All Stars to finally find their way back into the game when, Daniel Chin’s long ball into the box was inadvertently directed into the path of Sashikumar Mahathevan, who make no mistake to calmly finish for the equaliser.

The Blacks did ask questions in their own right with a smacker by Alex Wong, which narrowly missed ripping the net had it found it.

However, it was the All Stars who soon went ahead when the Blacks failed to clear their lines after a freekick, allowing Ronald Chai to float his shot into the top right corner of the goal.

With the second goal, the Blacks, while matching their predecessors, were left distracted, leaving more than desired room for the All Stars to capitalise, adding two more goals before the break.

Top of the pick was the first of Cyrill Binder’s brace, which exhibited the former players’ guile.

From a quick counterattack, Sashikumar Mahathevan shot across the face of the goal was retrieved by Leong Chi Chao, before finding Ronald Chai at the edge of the box, and whose pass to Jason Lu was deft touched to Cyrill Binder, who in turn side footed into the back of the net for a team goal of the highest quality.

It did not take the former stars long to score their fourth, after another error of judgement allowed Cyrill Binder a simple header from a long freekick from Andrew Bai.

The half ended with a penalty appeal from Ian Morris, which was vocally dismissed by the All Star bench more than the referee, claiming that the dive did not score enough points worthy of any Games medal.

The Blacks were delighted to have Parthiban Aruchamy return for the first time in almost two years after this ACL surgery.

The Hilderincs also had Denis Lobov and Sai Ganesh, join Mohd Hissham, who had entered the fray in the first half, while team General Manger, Simon Khaw took his spot in between the sticks.

The restart saw a much improved Hilderincs, who willingly took the game to the All Stars, facing off more confidently without showing too much to cower, even to an extend of some heavy tackles peppered from both sides.

The Blacks showed more going forward despite their attacking lack, but the All Star defensive stalwarts rolled back the years to keep a tight lid at the back.

Though there were no goals to add into the second half, both sides created opportunities to score in an absorbing encounter.

While Simon Khaw was the less busy of the two goalkeepers, he had Alex Wong to thank for a goal line clearance from a Ronald Chai belter, and Nicholas Ledenmark for another stop from Cyrill Binder.

The Hilderincs were denied a more respectable scoreline were Bobos, once again proving a worthy nemesis each time he plays against them, kept out Ian Morris, Jeevan and Alex Wong to secure a clean sheet for himself, though the Blacks fullback would have felt aggrieved to have his goal chalked of for an offside towards the end of the game.

With the 4-1 HFC All Stars win over Hilderinc FC, Jeffery Tay masterminded a win over his former chief, Ian Morris, but with the final whistle, the occasion of the day was celebrated once again.

The return of the All Stars was a fitting tribute to the Club, whose journey continues towards their next milestone, having started off with former players and now being carried on by the current casts.

HFC, whether akin as the Harvester FC by the old guards, or as Hilderinc FC by the new, once again proved to be special, fostering relationships and friendships, brought together by the love of the Beautiful Game.

And more than the grit and intensity against each other during the game, the HFC players, past and present outdid themselves by exceeding the expected contributions collected for the beneficiaries of the day.

With the opportunity to give to the Singapore Children’s Society kept open till 11:59pm, Sunday, 5th July 2015, if you wish to give your contributions, please kindly email us at admin@hilderincfc.com, with the subject heading, “15th Anniversary Charity Match” for more information on the procedure of donation. 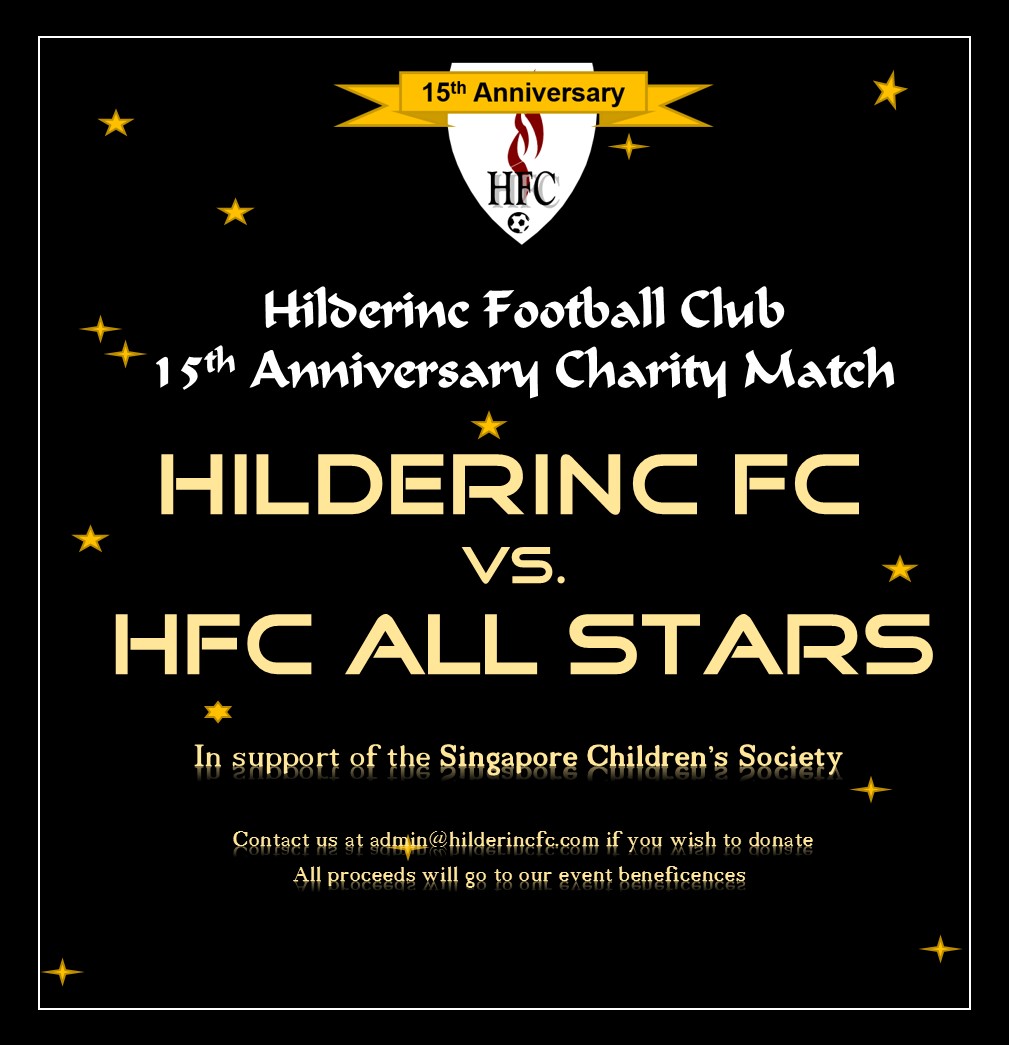 ALL proceeds collected from 28th June – 5th July 2015 will go to the Singapore Children’s Society. 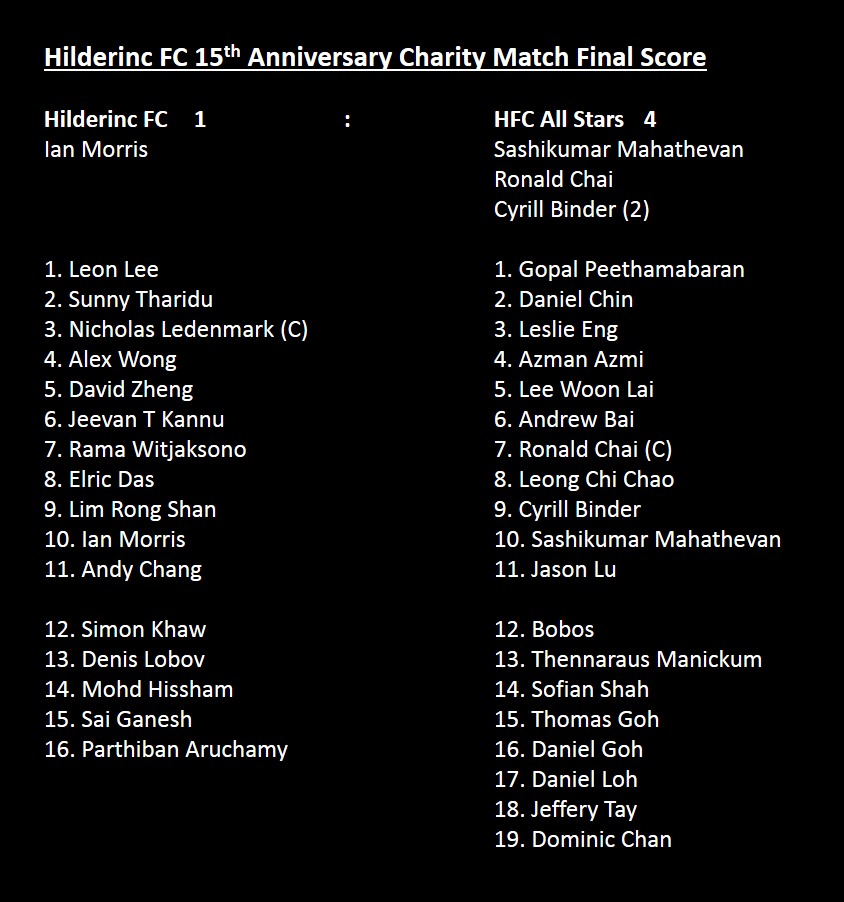